Supporting the fight against cancer 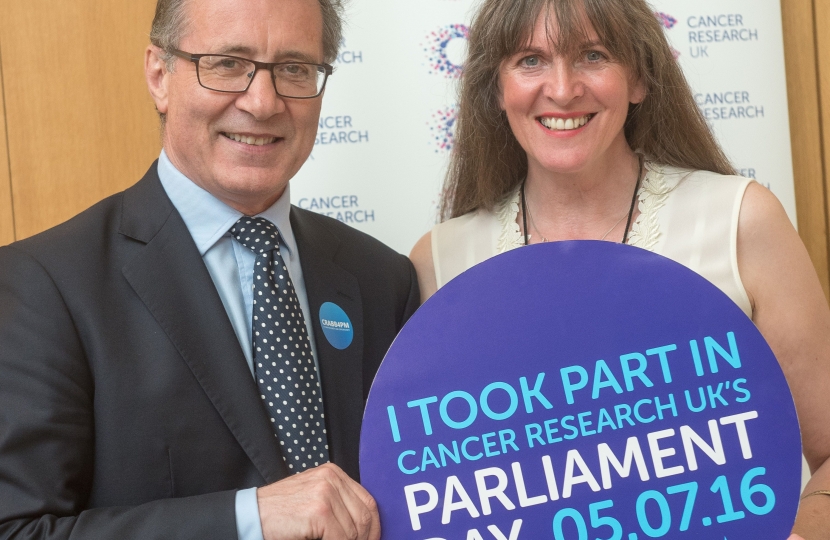 Mark joined campaigners in Westminster this week to find out more about their work in combating cancer.  During the event, Mark met with Rugby’s Cancer Research UK Ambassador Fiona Sewell. Fiona had travelled to Westminster to support Cancer Research UK’s new campaign aimed at tackling childhood obesity, a leading cause of cancer in later life.
Research into finding ways to help those with cancer is a major part of health policy, both in terms of preventing cancer and in for supporting those with all types of cancer.
Speaking after the campaigns launch, Mark commented:

“The fight against cancer is one of the most important issues for public health at the moment. We now have 2 in every 4 people with cancer surviving for at least 10 years and there has been significant progress over the past 40 years in improving cancer outcomes.”

“However, I recognise that there is still far more work to be done and that is why I was so pleased to be able to meet with Fiona and talk to her about what we can do locally to help those with cancer. Many people will know that I am a proud supporter of the fight against cancer, regularly taking part in the Macmillan Coffee Morning each year either at my office or in the community.”

“Developing a clear plan to help those with cancer was a key part of health policy under the previous coalition government and this government is continuing to build on that progress through the £1 billion Cancer Drugs Fund. By working with dedicated charities like Cancer Research UK and their hardworking supporters, I know that we can get to a future where we can cure cancer.”

“It was really good that our local MP, Mark Pawsey, was able to support Cancer Research UK’s campaign in Westminster. By taking action to combat childhood obesity, it will both save money in the NHS and save lives by preventing some of the main cancer cases each year. Tackling obesity will also help to prevent pancreatic and oesophageal cancer in later life.”

• Cancer Research UK’s pioneering work into the prevention, diagnosis and treatment of cancer has helped save millions of lives.

• Cancer Research UK receives no government funding for its life-saving research. Every step it makes towards beating cancer relies on every pound donated.
• Cancer Research UK has been at the heart of the progress that has already seen survival in the UK double in the last forty years.

• Cancer Research UK supports research into all aspects of cancer through the work of over 4,000 scientists, doctors and nurses.

• Together with its partners and supporters, Cancer Research UK's vision is to bring forward the day when all cancers are cured.

For further information about Cancer Research UK's work or to find out how to support the charity, please call 0300 123 1022 or visit https://www.cancerresearchuk.org. Follow us on Twitter and Facebook.