Rugby’s MP shows his support for people with Parkinson’s 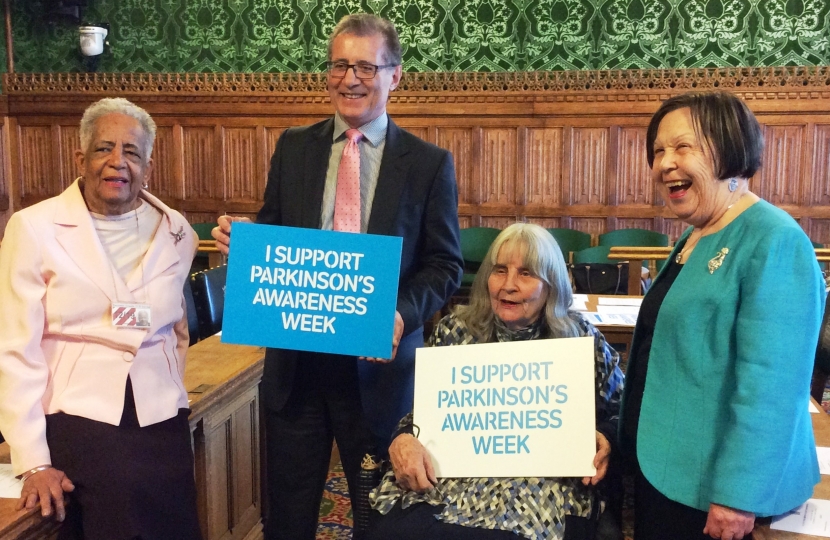 Helping to support those with Parkinson’s was on the Parliamentary agenda this week as Rugby’s MP met with Baronesses Masham, Howell and Gale to highlight Parkinson’s Awareness Week.

Parkinson’s UK have recently revealed research to mark the start of Parkinson’s awareness week. The research shows that as many as one third of people with the condition have felt the need to hide their symptoms or lie about having Parkinson’s.

There are 127,000 people with Parkinson’s with the UK with approximately 11,000 affected in the West Midlands, with someone being diagnosed with the condition every hour. Parkinson’s UK estimates that 42,000 people in the UK have delayed sharing their diagnosis with someone close to them, due to feeling awkward or embarrassed around them (63%), feeling they would be judged (34%), or not feeling like the symptoms were socially acceptable (32%).

“No one should feel alone when dealing with Parkinson’s. I was very happy to be able to meet with Baroness Gale, Baroness Masham and Baroness Howell, alongside other members of Parkinson’s UK for Parkinson’s Awareness week.”

“As President of the Rugby branch of Parkinson’s UK, I am very aware of the challenges faced by those with the condition. I know that there is a tremendous amount of support available to those who have Parkinson’s and I hope that this research will encourage those who are diagnosed to come forward and get that support.”

“The research that Parkinson’s UK has revealed this week demonstrates that although there has been a lot of progress made in helping those with Parkinson’s, there is still a lot more which can be done. I know that here in Rugby, our Parkinson’s UK branch does great work helping those with the condition and I would encourage anyone affected by Parkinson’s to attend one of their meetings at Rugby United Reformed Church on the last Thursday of each month.”

Anyone wishing to know more about Parkinson’s can contact the Rugby Branch of Parkinson’s UK Chairman, Jim Cave on 01788 573399 or by emailing jimcave@mypostoffice.co.uk. Alternatively you can visit their website, http://www.parkinsons.org.uk/local-support-groups/regions/west-midlands/rugby-branch.