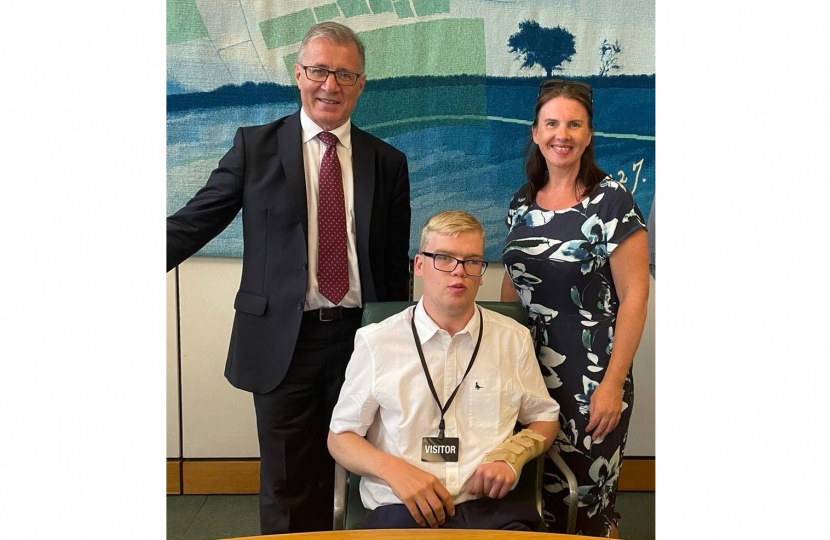 A Rugby student’s call for a change in the law to require cyclists to wear helmets has gone all the way to Westminster thanks to the backing of local MP Mark Pawsey.

Oliver Dibsdale’s life was changed forever after he came off his bike and struck his head whilst cycling to school as a teenager. The injury caused a significant brain injury and Oliver now has limited mobility and requires care. After his injury, Oliver contacted Mark to make the case for a change to the law to mandate the wearing of helmets whilst cycling. Oliver has also spoken to Mark of the impact not just on himself, but also on his family who have also been affected by Oliver’s lifechanging injuries. Mark who himself is a keen cyclist, has met with Oliver to hear his story and taken his powerful call up with Ministers.

Recently, Mark was able to secure a meeting with Trudy Harrison MP, Parliamentary Under Secretary of State for Transport, and invited Oliver to Westminster to speak to Trudy and senior Civil Servants at the Department for Transport about the impact that not wearing a helmet when he came off his bike. Oliver asked Minister Harrison to look again at a change in the law, as it is his firm belief that had he been required to wear a helmet, his injury would have been less severe or even avoided altogether.

During the meeting with Oliver and Mark, Minister Harrison said that although the Government has considered this issue carefully, their focus is on encouraging people to wear a helmet rather than mandating it through legislation. The Minister commended Oliver on his work raising awareness of his injury and invited him to be part of the Government’s road safety campaigning on this important issue.

Speaking after the meeting with Oliver and Minister Harrison, Mark said:

“Oliver’s story is deeply moving, and I have a great deal of sympathy for his calls for a change in the law to make wearing a helmet whilst cycling mandatory. We never think that it will happen to us, but as Oliver’s case shows a lifechanging injury can occur in the blink of an eye – but wearing a helmet can massively reduce the risk of being seriously hurt in the event of an accident.”

“I am pleased that I was able arrange this meeting on Oliver’s behalf and I know that his thoughts were taken on board by the Minister. I fully support the Government’s work to increase active travel, with the health benefits that cycling can provide. I hope that everyone hearing Oliver’s story will make sure that whenever they get on a bike will wear their helmet to keep themselves safe.”

“Wearing a helmet is the single most effective way of reducing head injuries and fatalities resulting from bicycle crashes.  I once made the mistake of not wearing one, because I thought I thought I was untouchable, but what I thought was so wrong. My foot simply slipped of the pedal, which could have happened to anyone. So it’s simple, make head protection law on all types of bikes, not just motor bikes. A helmet is more than 70% effective at preventing a serious head injury.”