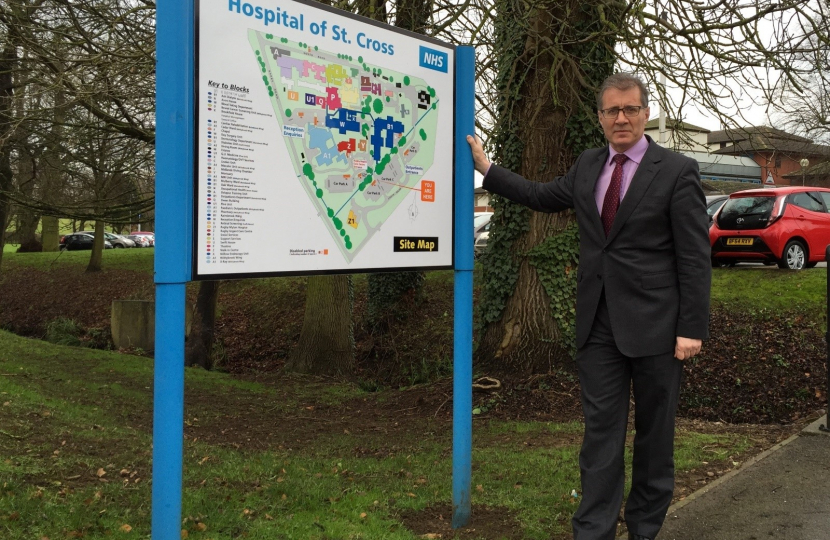 Rugby MP Mark Pawsey has secured a Ministerial visit to the Hospital of St Cross following last week’s debate in Parliament on the need for greater A&E provision at Rugby’s local hospital.

The debate followed Mark’s survey asking for local residents’ views on urgent and emergency care in Rugby and at University Hospital Coventry and Warwickshire. The survey was completed by nearly 3,000 people and overwhelmingly showed that the people of Rugby feel that there is insufficient urgent and emergency care locally, particularly in the context of the growth in population over recent years.

In the debate, Mark spoke about the history of the Hospital of St Cross and the decision to downgrade the A&E provision to an Urgent Treatment Centre in 1997, which bitterly disappointed the local population. This was part of a wider move at the time to concentrate specialist services at a smaller number of sites. At the time of this decision, Rugby’s population was viewed by the Royal College of Surgeons as not sufficient to support the specialist clinicians required to operate an A&E department. However, as Mark emphasised during his speech, since this decision was made, Rugby’s population has grown significantly and by 2031 under Rugby’s present local plan the population is estimated to be 130,000. Mark argues that these demographic changes dramatically alter the case for enhanced provision at St Cross to provide Rugby residents with easier access to emergency healthcare and to reduce the pressure on the existing capacity at University Hospital in Coventry, which now serves a population of nearly 600,000 – almost double the national average.

Responding for the Government, Health Minister Edward Argar thanked Mark for his speech and his work on representing Rugby and supporting the NHS, including his time as a volunteer at Locke House during the covid vaccine deployment. He also described the 3,000 responses to Mark’s survey “a phenomenal response rate” and drew attention to the powerful message with the unanimity of the responses represented. The Minister also spoke about the investment already being provided at the Hospital of St Cross, including a £1 million purpose-built haematology and oncology unit, and new modular theatres to help treat more patients on elective waiting lists. This comes alongside the £15 million the Government has provided to University Hospital Coventry and Warwickshire NHS Trust to improve their Accident and Emergency department.

“I’d once again like to thank all those who contributed to my survey and who have helped me to make the case for greater provision of A&E services at the Hospital of St Cross. I was very pleased to be able to present my findings, and the arguments in favour of expanding services at Rugby’s local hospital on the floor of the House of Commons and ensure that the voices of my constituents are heard. I will of course be sharing my findings with the Department for Health and Social Care, as I have with University Hospitals Coventry and Warwickshire NHS Trust.”

“As Rugby has grown, the argument for providing more health provision has grown commensurately and it is an argument which I have made since being elected as Rugby’s MP. I am very pleased that the Secretary of State has agreed to visit the Hospital of St Cross and I look forward to showing him both the outstanding work which is already taking place there, and the opportunities which exist to expand the services offered for local residents.”