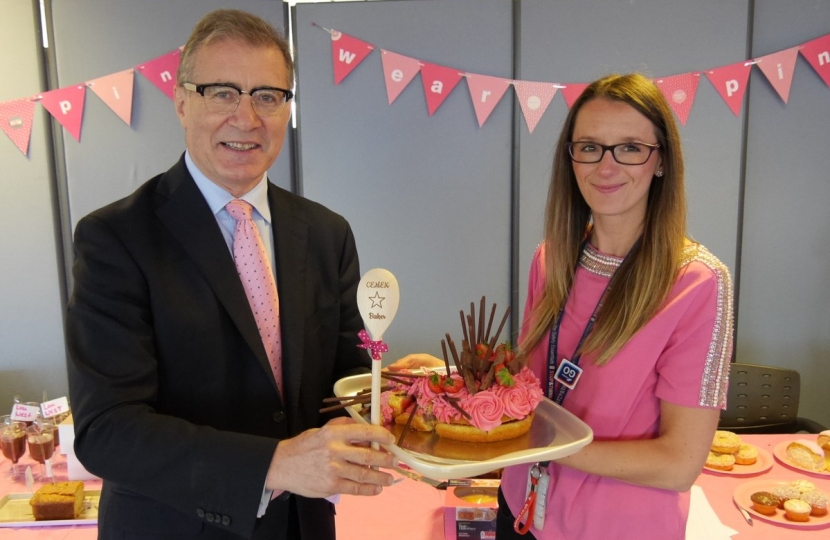 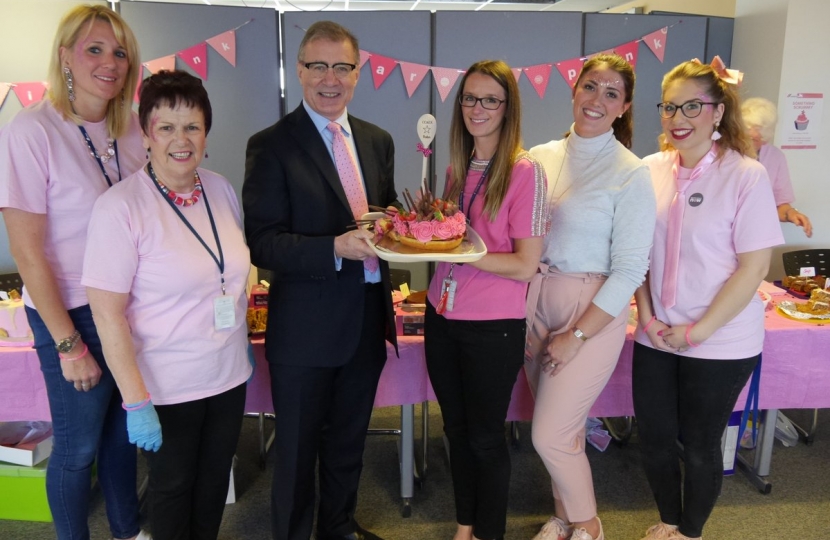 Local MP Mark Pawsey has backed charity events supporting the fight against cancer both in the constituency and in Westminster this week.

Rugby business CEMEX invited Mark as a special guest to judge their ‘Great CEMEX Pinkish Bake-off,’ in support of Breast Cancer Now, with Star Baking going to one of the CEMEX Go team, Louise Trodden. Her award winning cake was a vanilla sponge with jam and strawberries in the middle and pink icing on the top.

The day helped raise over £1,500 for research into breast cancer and alongside the Bake-Off, there was a raffle, tombola, cake sale and grab a duck competition. Local companies also turned out to show their support, with stalls from the Book People, Wendy’s crafts, Neal’s Yard, Henley’s Chocolates and Rockware & Co. Breast Friends from Northampton were also on hand to provide information about breast care and awareness.

Later on in the week, Mark also supported the annual Macmillan World’s Largest Coffee Morning in Parliament. As well as raising funds for life-saving research, the coffee morning provided a chance for MPs to speak to cancer patients, Macmillan nurses and NHS staff, and to discuss the progress of the Government’s cancer strategy.

“I’ve always been a strong supporter of the fight against cancer and every year I am impressed by the generosity of local residents in backing the many charities which aid this fight. This year however is the first year that I have been asked to judge a Bake-off and it was great to see so many people getting involved. All the staff at CEMEX should be proud of their achievement in raising £1,500 for charity, which I know will help fund lifesaving research.”

“It is great news that more people than ever before are surviving cancer and a real tribute to the hard work of NHS staff who deliver lifesaving treatment every day. With the additional funding announced this year for our NHS, we have an opportunity to build on the progress we have already made and ensure that everyone who has cancer gets the world-class care they deserve.”