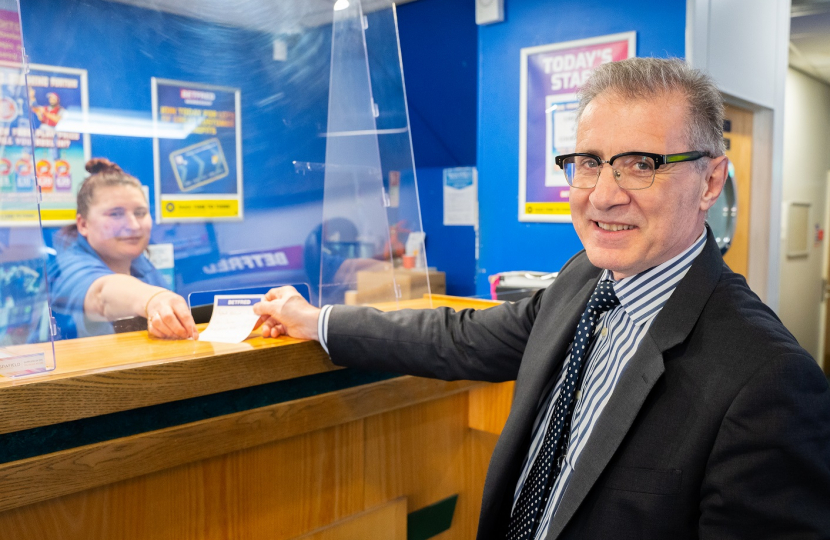 Rugby MP Mark Pawsey visited local betting shop Betfred in Rugby’s town centre to discuss the work of the Betting and Gaming Council and place a charity bet on the 2022 Grand National, won by Noble Yeats. Despite Mark’s horse not coming in, Mark chose to use the charity funding to support the “OurJay” campaign to fund more defibrillators in Rugby.

This was part of a wider charity initiative co-ordinated by the Betting and Gaming Council, the standards body for the regulated UK betting and gaming industry, for MPs to visit a local bookies in their constituency to place a complimentary charity bet ahead of the world’s most famous steeplechase. For his bet, Mark chose to support the “OurJay” campaign, started in memory of Rugby resident Jamie Rees. Jamie tragically died after suffering a cardiac arrest and his friends were unable to access a defibrillator. The campaign is hoping to install more defibrillators in Rugby and has already provided a new one at Rugby College, where Jamie was a student. £250 has been donated to the “OurJay” campaign following the Grand National. Mark has also met with Jamie’s parents, to discuss the importance of public access to defibrillators and health services in Rugby more broadly.

The Grand National is the most popular horse race in the world and is watched by an estimated 600 million people across 140 countries. It is estimated that around half the entire UK adult population place a bet on the race. Mark placed his bet on Any Second Now, who finished second.  However, thanks to the generous support of the Betting and Gaming Council, a £250 donation has been made to the “OurJay” campaign.

"The Grand National is one of those great sporting moments when the whole nation comes together. I was delighted to visit my Betfred to speak to staff and customers, and on their offer of a complimentary bet and also discuss the incredibly important work they have been doing on safer gambling.”

“I also wanted to support the OurJay campaign, which is an extremely important campaign in memory of a local resident who tragically lost his life far too early. The work which his family are doing in his memory will help to save lives, and I was very pleased to make the charity donation to their campaign in his memory.”

“Jamie’s family really appreciate the kind donation that MP Mark Pawsey made via Betfred. Our fundraising campaign, started in memory of Jamie, to install outdoor accessible defibrillators across Rugby has reached over £17500 in total and this £250 is a great contribution to that. We feel that accessible defibrillators are even more vital currently, due to the delays in ambulance response times in Rugby. We are aware that Jamie’s survival chances would have increased massively had a defibrillator been accessible to his friends on that horrific night, as Jamie waited over 17 minutes for an ambulance to reach him.”