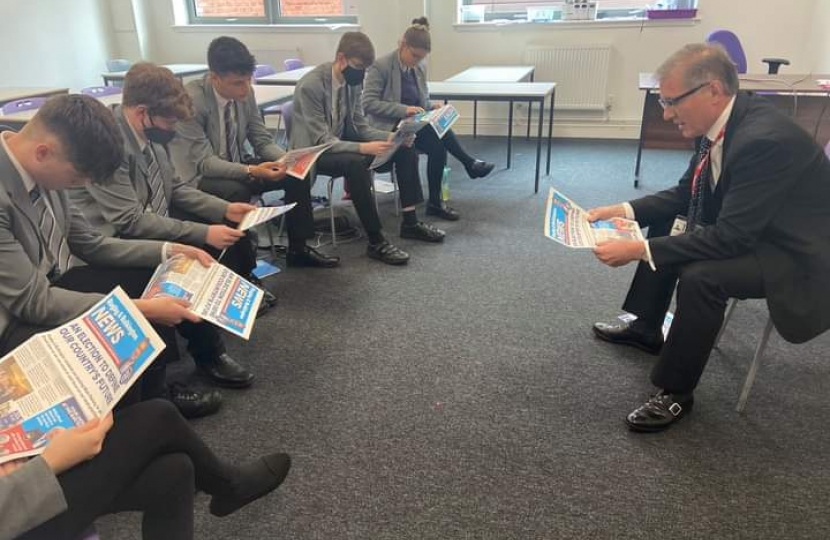 Hopeful Head Students at Rugby Free Secondary School received some expert advice from local MP Mark Pawsey after he met with them ahead of their student elections.

Rugby Free Secondary School is holding elections for their two Head Students, with six students running this year. The school asked Mark if he had any advice for the students on elections or answer of their questions about running a successful campaign and Mark ensured that he made time to meet with them at the school to talk about his experiences of the electoral process.
The school’s elections are also being supported by Rugby Borough Council who have loaned some polling station equipment, such as ballot boxes, to Rugby Free Secondary School to help make the elections as realistic as possible. The students asked Mark what his advice was when running an election campaign and what they wanted to achieve if they were elected as a Head Student.

Speaking after meeting with the prospective Head Students, Mark commented:

“I am always pleased to support young people being engaged in politics, and so I was delighted to be able to speak to Rugby Free Secondary School’s prospective Head Students. As I know from experience, running in any election is a challenge, but is also greatly rewarding and the cornerstone of our democracy.”

“All of the students I met with had some really great ideas for what they would do as a Head Student and their enthusiasm for the role, and for holding an election for these positions, was very clear. It is always very encouraging to see young people wanting to take part in the political process and to be able to pass on some of the things which I have learned over many years of campaigning. I wish all the students the best, both in these elections and in the future.”

“Some of our Year 11 students had the pleasure of meeting Mr Pawsey as part of their campaign process for the Head Student Elections. Students shared their visions with him and listened to his advice about running a successful campaign, implementing some of his ideas before the elections took place the week after. It was extremely beneficial for the students and a brilliant opportunity for them to become engaged in the political process. We hope this is something that can be continued in future.”