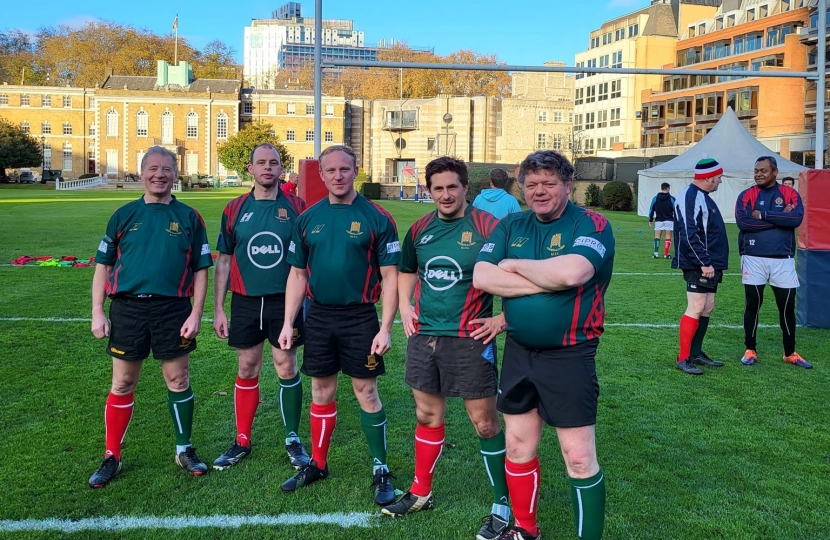 For the first time since the pandemic began, the Commons and Lords Parliamentary Rugby Team have played their annual charity match which this year raised £1,500 for Combat Stress.

Mark Pawsey, MP for Rugby and Bulkington and Chair of the Commons and Lords Rugby Football Club, joined a number of his Parliamentary colleagues and members of staff on the Parliamentary estate to play a British Army Vets XV at the Honorary Artillery Company in central London. It was the first game the Parliamentary team has played since the coronavirus outbreak, and the close match finished 36 – 34 in favour of the British Army team.

The money raised by the game will go to support Combat Stress, the UK’s leading charity for veterans’ mental health. It specialises in helping former servicemen and women with mental health problems such as post-traumatic stress disorder (PTSD), anxiety and depression. Combat Stress was founded in 1919 and since then has supported veterans from every service and every conflict in which UK forces have been involved. Over 80% of the funding raised by the game will go directly to veteran treatment and support.

The Commons and Lords play a version of ‘golden oldies’ rules which plays similarly to touch rugby, with the emphasis on preventing injury to older players through uncontested scrums and players being “held” rather than tackled to the ground.

Speaking after the game, Mark said:

“It was great to be able to get back on the rugby pitch with the Commons and Lords Rugby Football Team and raise money for such a worthy cause. Sport has always been a way to bring people together, and the importance of this has only been highlighted by the pandemic and the restrictions it has placed on many of the activities which we enjoy. I want to thank the British Army Vets for playing such a close and entertaining game, with both teams evenly matched right up to the final whistle.”

“The Commons and Lords Team has always looked to support charities and matches such as this have always been a highlight. This year we chose Combat Stress, who work closely with those who have served our country in some of the most challenging circumstances. The money we have raised will enable Combat Stress to continue to provide highly specialised treatment to UK veterans at their centres in England, Scotland and Northern Ireland.”