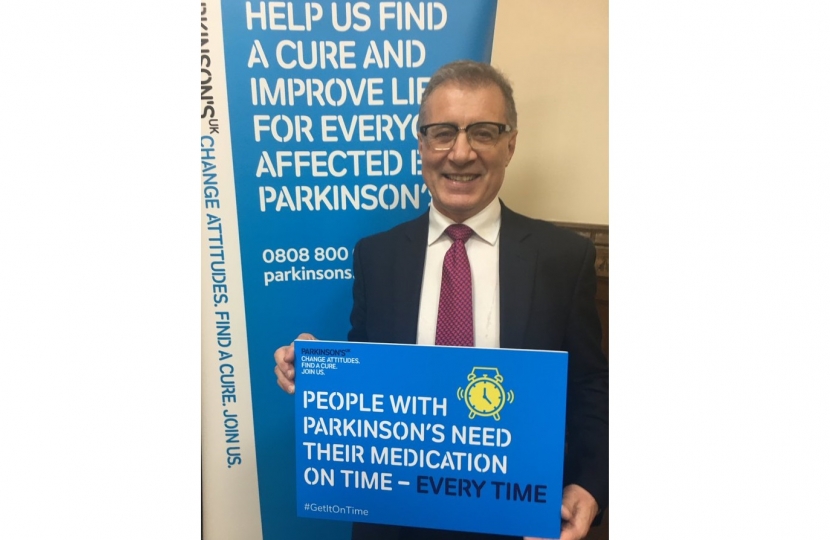 Mark Pawsey MP has lent his support to the Parkinson’s UK ‘Get It On Time’ campaign, calling on the NHS to roll out mandatory training on Parkinson’s to improve patient care and reduce excess bed days which currently costs the NHS up to £10 million per year.

Medication is a lifeline for people with Parkinson’s but for those living with the condition, the reality of going to hospital can be unsafe and frightening, simply because they might not get their medication at the right time, or at all.

Mark joined other MPs from all parties at a parliamentary briefing in Westminster on 16th October. There, he was surprised to learn that nearly half (45%) of West Midlands hospital trusts don’t offer hospital staff mandatory training on Parkinson’s.

Parkinson’s UK believes that a lack of understanding about the condition is one of the main causes of medication mismanagement. Research from the charity shows that nearly two thirds of people with Parkinson’s didn’t consistently get their medication on time in hospital. More than three quarters of people reported that their health deteriorated as a direct result of this, with people experiencing severe tremors, anxiety and even being unable to walk or talk.

“No one should fear going to the hospital, and I was saddened to discover so many people living with Parkinson’s can face unnecessary life changing experiences simply because they do not get their medication on time. It’s clear that by improving awareness of this misunderstood condition we can make a huge difference to people living with Parkinson’s in our local area.”

“As the President of the Rugby branch of Parkinson’s UK, I was very pleased to learn that University Hospitals Coventry and Warwickshire NHS Trust does offer mandatory training on Parkinson’s. However, the report from Parkinson’s UK shows that there is clearly much more to be done in improving awareness and I hope that the NHS will look to implement the recommendations of Parkinson’s UK as soon as possible.”

In Parliament I was able to present the petition, signed by over 4,300 local residents, calling on the West Midlands Ambulance Service to abandon their proposals to close Rugby Community Ambulance Station.

The ‘Get it on Time - the case for improving medication management for Parkinson's’ report makes several other key recommendations for hospitals across the UK, including:

● Every hospital to ensure there is a self administration policy that is in date for Parkinson’s patients to take their own medication if they’re able to do so.

● Every hospital to record patient safety incidents caused by conditions such as Parkinson’s.

● Every hospital to ensure a Parkinson’s specialist professional is alerted when a patient with the condition is admitted to any hospital ward.

● Every hospital must record any occasion when the administering of Parkinson’s medication is delayed by more than 30 minutes as a patient safety incident.