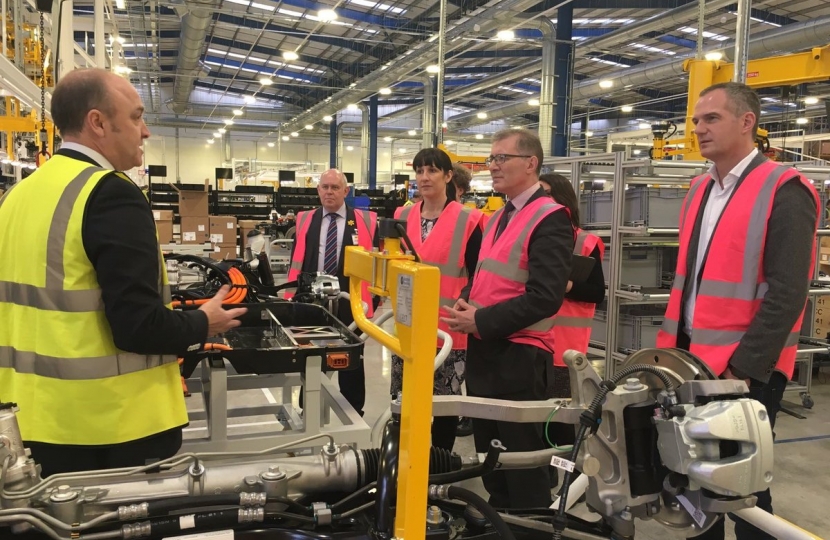 Rugby’s MP Mark Pawsey has urged the Prime Minister to ensure that the automotive sector is able to continue to trade tariff free within the Single Market following the UK’s exit from the European Union.

The automotive sector has seen a resurgence over recent years within the West Midlands following major investment by Jaguar Land Rover and the London Electric Vehicle Company (LEVC). As a member of the Business, Energy and Industrial Strategy Select Committee, Mark has been a champion of the sector and recently brought the committee to Rugby to see the work taking place at the LEVC’s factory as part of their enquiry into electric vehicles.

In response to Mark’s question, the Prime Minister highlighted the opportunities for UK businesses as the UK becomes a global trading nation. The Prime Minister also confirmed that the Government was working closely with the sector during the negotiations with the European Union and continuing to seek as free and frictionless trade as possible.

“Delivering certainty for businesses as we leave the European Union is vital. The automotive industry is a great success story and one that has really put the West Midlands on the map as somewhere to bring highly skilled engineering and manufacturing jobs. As Rugby’s Member of Parliament, I’ve met with businesses throughout the constituency who work within the automotive sector and they have stressed to me the importance of ensuring tariff free access to their largest market – the EU – once we leave.”

“The Business, Energy and Industrial Strategy Select Committee has also examined the impact of Brexit on the automotive industry and found that a ‘hard Brexit’ would risk jobs, growth and investment locally. As a member of the Committee, I have urged the Government to retain regulatory alignment with the EU regulatory framework for the short to medium term in the interests of supporting this vital industry, which contributes so much to our local economy.”

“As the recent decision by Toyota to invest in build the next generation of Auris hatchbacks in Derbyshire demonstrates, there is a great deal of confidence in the UK’s economy. It is now vital that our future relationship with the EU safeguards our access to their markets and encourages other manufacturers to follow their lead and invest in Britain.”