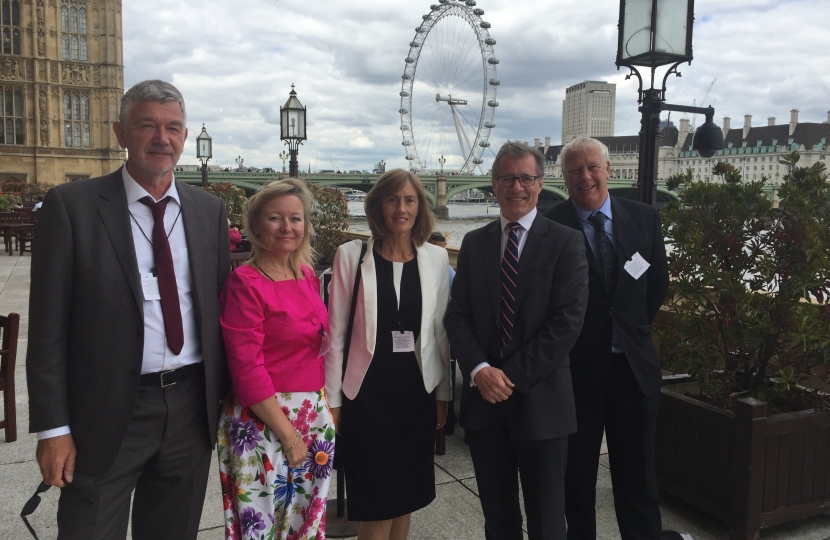 On Tuesday 24th May, Rugby MP Mark Pawsey welcomed the new Mayor of Rugby, Councillor Sally Bragg, and her husband, Mark Bragg, to Parliament. The Mayor was joined by Rugby’s longest serving Borough Councillor, Leigh Hunt who also serves as the Communities and Homes Portfolio Holder.

During their visit, they were able to look around the Palace of Westminster including the Chamber of the House of Lords and met with Mark on the Terrace outside the House of Commons, overlooking the River Thames. The group then headed to a Garden Party at Buckingham Palace hosted by Her Majesty the Queen.

Commenting after her visit, the Mayor said:

“We thoroughly enjoyed the visit and our MP’s generous hospitality. It was the first time that my husband had been inside the Houses of Parliament and a first for both of us to attend the Royal Garden Party. This was made even more special by us seeing the Queen, Prince Philip, Will and Kate. It was certainly a day to remember!”

“I was delighted to welcome Councillor Sally Bragg as Mayor to Parliament last week. As Parliament was debating the Queen’s speech, it was a particularly interesting time for her to visit.”

“I am very pleased that the Mayor and her husband, along with Cllr Hunt, were able to visit Westminster and see Parliament at work. I hope that that the day will have been both interesting and valuable.”