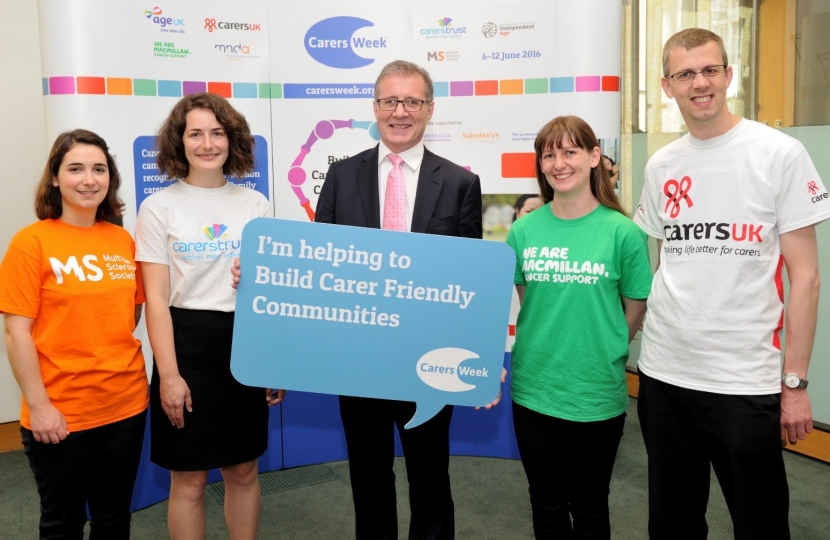 Rugby MP Mark Pawsey was keen to show his support for Rugby’s army of carers last week as part of this year’s National Carers Week.

Across the UK 6.5 million people perform a vital role as a carer for a partner, relative or friend, including over 10,000 within Rugby.

The charities driving Carers Week 2016 including the MS Society, MacMillan Cancer Support and Age UK, are calling on individuals, organisations and services throughout the country to improve the lives of carers. The charities want to see ‘Carer Friendly Communities’ across the country which will encourage all parts of the community to think about carers and do things differently to support them.

The call comes after research for Carers Week revealed that a combination of inadequate support from local services and a lack of understanding about caring from wider society is having a negative impact on carers’ health, wellbeing, relationships and finances.

“Carers play a vital role in helping members of our community who need a bit of extra support. As Rugby’s MP I have had the privilege of meeting so many dedicated, selfless, carers in the local area who play what is all too often a hidden role. I know as from my work as President of Parkinson’s UK Rugby branch just how important a carer can be to those who need, and rely upon them.”

“Since becoming Rugby’s MP in 2010 I have spoken in Parliament a number of times about the fantastic work being carried out by young carers in the town and the incredible support they receive from the Hill Street Community Centre. Being a carer is incredibly challenging and we should take every opportunity to help carers from across our community.”

“I hope that following carers week, more local residents will be aware of the important work that carers do throughout our community and do what they can to support them in their vital roles.”

Carers Week is an annual awareness campaign which takes place to celebrate and recognise the vital contribution made by the UK’s 6.5 million carers. It is also a time of intensive local activity with thousands of events planned for carers across the UK.

Carers Week is kindly supported by Sainsbury’s, Nutricia and the Lockwood Charitable Foundation.