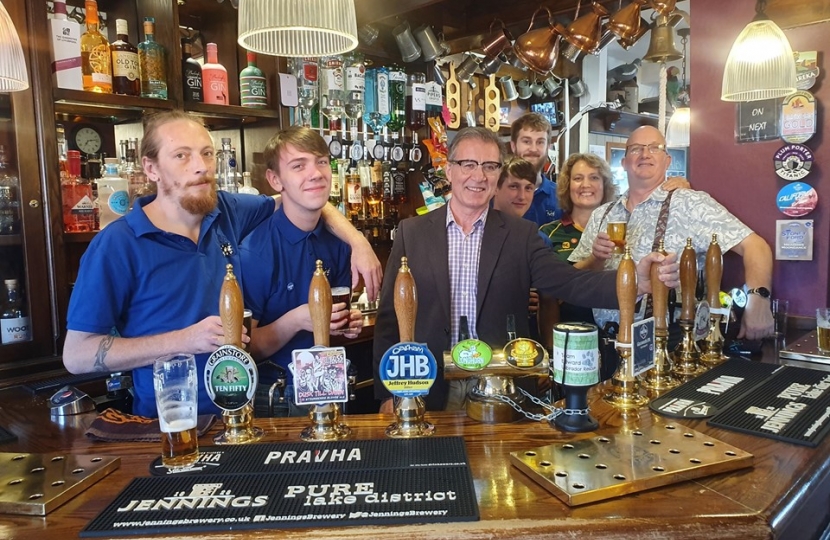 Rugby pub the Seven Stars welcomed local MP Mark Pawsey to talk about their success in CAMRA’s best pub awards and the benefits of a thriving pub sector.

The Seven Stars in Albert Square was named both the best pub in Rugby and the best pub in Warwickshire in CAMRA’s 2019 competition – the second time the pub has won this prestigious award. Whilst there, Mark not only spoke to the licensees Graham Proud and Lisa James about the work they and their staff have put in for this award, but also the crucial role which pubs play in the fabric of Rugby’s community.

Alongside an excellent selection of real ale, wines and spirits, the Seven Stars also promotes the game of rugby and are part of the Wasps Affiliate Pub Scheme. Graham and Lisa spoke with Mark about how Rugby’s history as the birthplace of the game is a great opportunity to encourage people to visit in the run up to the Rugby World Cup 2019 and gave him a preview of some of the events they were planning to celebrate over during the tournament.

“I wanted to express my congratulations to Graham, Lisa and their team on being recognised as the best pub in Warwickshire. It’s a really great achievement and anyone who visits the Seven Stars will immediately see why they won this award.”

“Supporting our pubs is a really important part of supporting the community, with pubs in Rugby being involved in promoting sport, live music and community events every day. I was proud this year to support CAMRA’s ‘Long Live the Local’ campaign to continue to freeze beer duty, as the Government has done for the last year, and I hope that we can continue to help pubs like the Seven Stars to flourish.”

“We were pleased to welcome Mark to our pub and appreciated his visit, which recognised our hard work to win this award. As with all companies, it is the team, both front of house and behind the scenes, which help make us the best pub in Warwickshire. We would like to thank our team and customers for their support in making the Seven Stars the pub it is today. In what is a challenging environment for pubs in the UK, Mark’s support for the ‘Long Live the Local’ campaign and Rugby pubs in particular is appreciated. We look forward to the year ahead.”