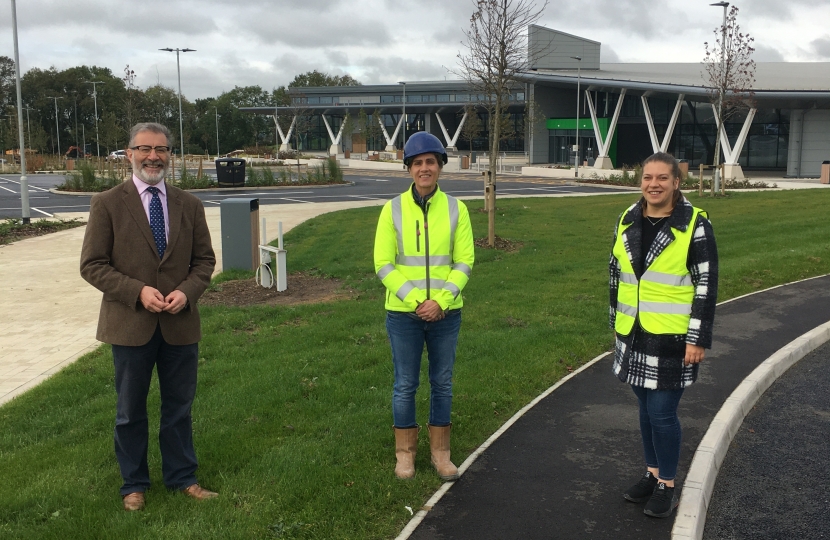 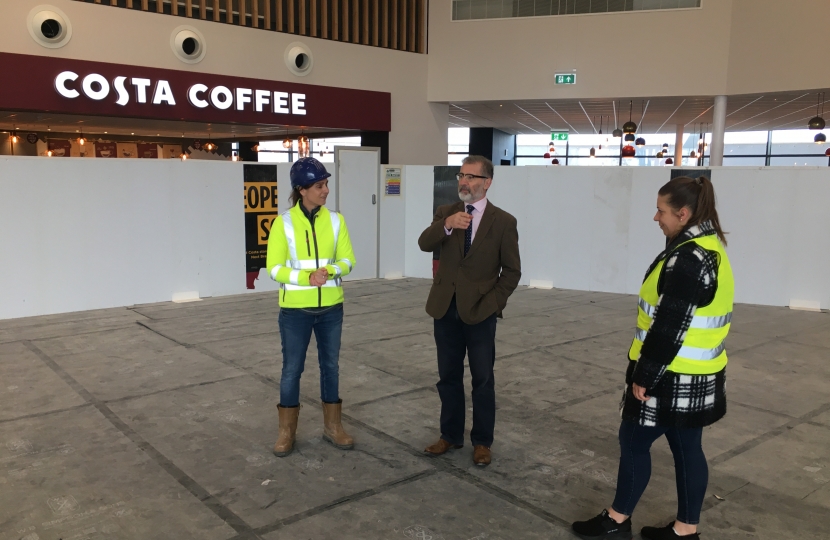 A new service station opening soon on the M6 has been praised by local MP Mark Pawsey for delivering 24 electric vehicle charging points at launch.

Mark visited the site near Churchover which is approaching completion and aims to be open early in 2021. The Motorway Service Area is being operated by Moto, and will provide a number of amenities, including an M&S Simply Food, a Costa Coffee and a Greggs, alongside toilets and overnight facilities for HGV drivers. When open, the station will create 215 full-time jobs in Rugby’s local economy.

At the site Mark met with Alexandra Purcarea, Site Operations Manager, and Wendy Corcoran-Smith, Project Manager. During the visit Mark was shown around both the parking area and the EV charging points, as well as the interior of the service station.

Speaking during his visit, Mark said:

“I am delighted to see that progress has been able to continue at this new Motorway Service Station despite the challenges of recent months. The site is now nearing completion and will provide a great new resource for those travelling on the M6. The site is also particularly good for encouraging the use of electric vehicles thanks to the installation of 24 EV charging points and it’s positioning nearly half way between London and Manchester. I was also very impressed at the way in which the site has been developed to retain green spaces and has newly planted trees within the cark park and outside the retail area.”

“This new site will also be welcome for both HGV drivers and local residents in the north of Rugby, as it will provide a dedicated truck stop. This will mean that there will be a dedicated overnight resting place on the M1, providing an alternative to HGV’s stopping on residential roads or industrial estates near the motorway. I know this has been an issue of concern to local residents in recent years and I hope that the new service station will address these concerns.”

Westminster Diary - In memory of His Royal Highness Prince Philip

Last week we heard the sad news that HRH the Duke of Edinburgh had passed away at the age of 99. For me, and for the vast majority of local residents, Prince Philip has been a constant presence at the side of Her Majesty the Queen, to whom he has provided a lifetime of unwavering support.