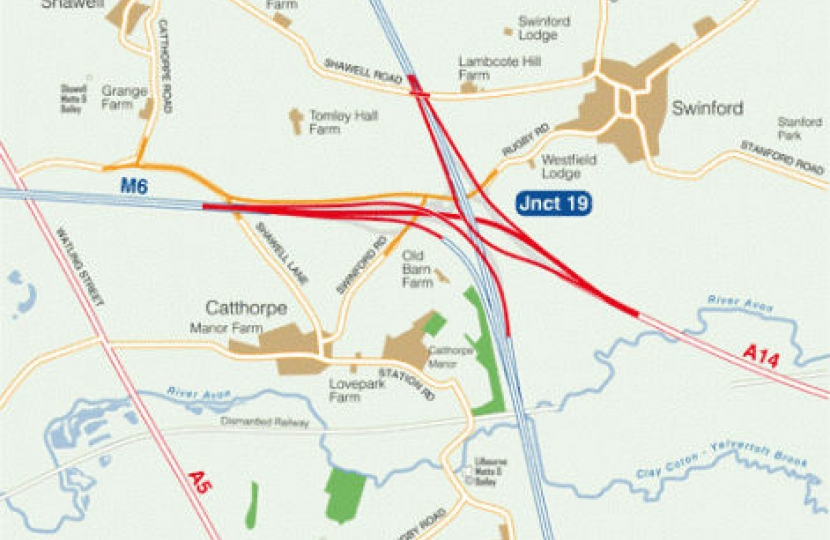 Rugby MP Mark Pawsey has welcomed news that the Catthorpe interchange at M1 Junction 19 is in line for improvements earlier than expected. The junction, well known to Rugby residents, suffers from considerable delays and accidents due to queuing traffic, especially at peak periods. The improvement works will seek to provide free flow links between the M6 and A14 and between the M1 and A14.

Earlier this year, Mark took a cross-party delegation of Rugby Borough Councillors to the Department for Transport, where the Roads Minister Mike Penning confirmed that improvements at Catthorpe, however desperately needed, would not be taking place until after 2015.

“I have received many representations from businesses about the difficulties of access at this junction. In addition, we regularly read in the local press about the many accidents that take place there often as a consequence of queuing traffic. So I am very pleased that the Department for Transport has decided to bring forward the scheduled work at Catthorpe, something that I had previously been advised would not be possible until the end of this spending review period in 2015”.

“Along with five other schemes announced in the Autumn Statement, construction work at Catthorpe should get underway within the next three years, stimulating growth and helping to free-up Rugby’s important transport links. We must not of course forget the spate of devastating accidents that have happened at this very dangerous junction, and I hope it is of some comfort to those affected that work will soon be underway”.

”The next step for this scheme will be the publication of the Notice of Intention to hold a Public Inquiry in 2012/13. We always knew that this would be the case, and whilst improvements are not scheduled to start tomorrow, I am delighted that Ministers have acknowledged the importance of investing in this congested and dangerous junction”.