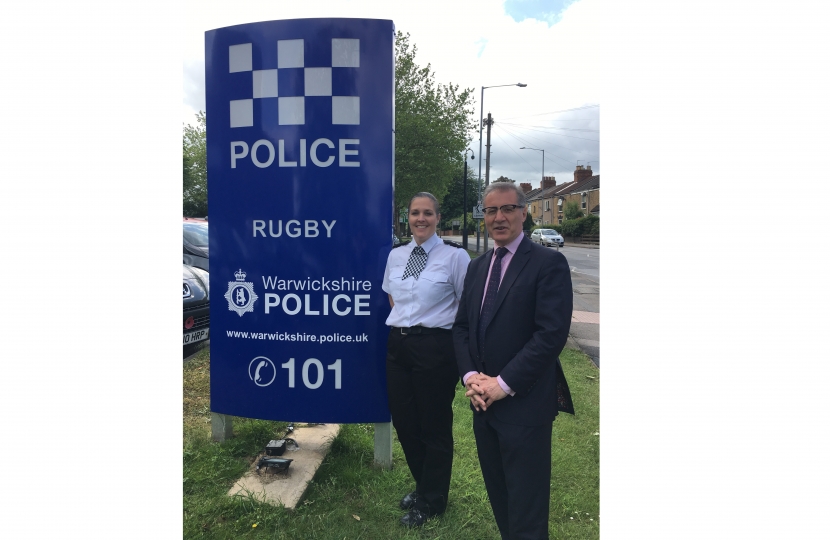 Rugby MP Mark Pawsey has welcomed the news that there are an additional 130 police on Warwickshire’s streets since the government launched its major recruitment drive in September of last year.

In Warwickshire there are now 1,043 police officers, significantly more than in previous years and a rise of over 14% compared to last year alone.

The recruitment drive is at the heart of the government’s commitment to back the police with more resources, powers and support to keep communities safe. Alongside recruiting more officers, other steps include the biggest funding boost for the policing system in a decade, a new covenant to recognise the service and sacrifice of the police, funding to provide over 8,000 more officers with Taser to keep themselves and the public safe, expanded stop and search powers, and plans to consult on increasing the maximum sentence for assaulting police officers and other emergency service workers.

Welcoming the news that there were more police on the streets of Warwickshire, Mark commented:

“Keeping residents safe is one of the foremost responsibilities of any government and a key part of that is supporting our police force. I am delighted that thanks to the hard work of Police and Crime Commissioner Philip Seccombe and Chief Constable Martin Jelly, Warwickshire Police are recruiting more officers who are serving our communities on the frontline.”

“Because of the coronavirus, these additional officers have never been so important. I want to thank them for all that they are doing to protect local residents and the NHS, which is saving lives. The Government is absolutely committed to backing our police with the funding and resources they need so they can keep the public and our communities safe.”

The Police and Crime Commissioner for Warwickshire, Philip Seccombe added:

“I would like to thank the Conservative and the Council Taxpayers of Warwickshire for providing Warwickshire Police with the funds to enable us to become the police force with the highest percentage increase of new officers in England & Wales. This has already given the force greater visibility in areas like Rugby and they are all working to keep Warwickshire safe during the coronavirus pandemic.”

The last year has reminded us all of the importance of well resourced local health services. That's why today in Parliament I asked Health Minister Ed Argar to ensure that great district hospitals such as our Hospital of St Cross in Rugby get the investment they need.