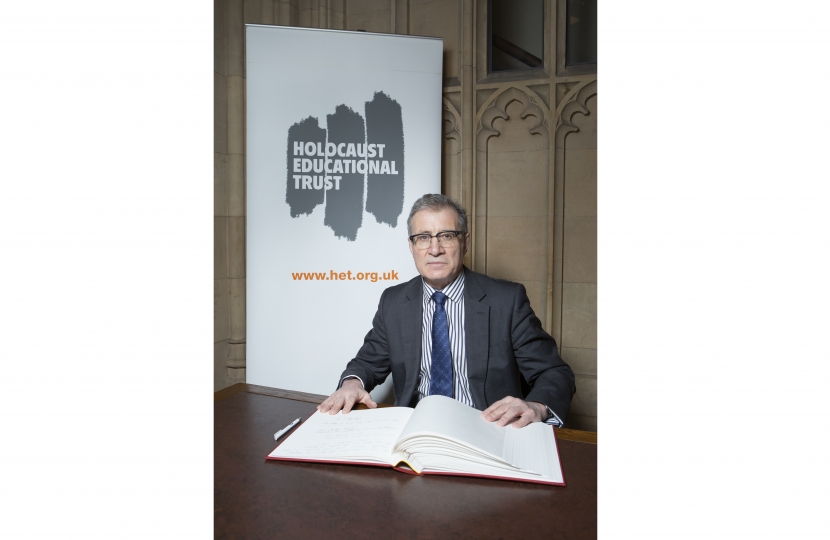 Holocaust Memorial Day, which takes place on 27th January, honours those who were murdered during the Holocaust as well as paying tribute to the extraordinary Holocaust survivors who continue to work tirelessly to educate young people today.

This year marks 77 years since the liberation of the concentration camps of Europe and the end of the Second World War. On the 27th January, the anniversary of the liberation of Auschwitz-Birkenau, people across the globe paused in order to remember the atrocities that happened during the Holocaust so that it is never allowed it to happen again.

In the lead up to and on Holocaust Memorial Day, thousands of commemorative events will be arranged by schools, faith groups and community organisations across the country, remembering all the victims of the Holocaust and subsequent genocides. The theme for this year’s commemorations is ‘One Day’.

After signing the Book of Commitment, Mark commented:

“Holocaust Memorial Day is an important opportunity for all of us to reflect on the darkest times of European history. As the Holocaust moves from living history, to history, it becomes ever more important that we take the time to remember the six million Jewish victims and also pay tribute to the survivors.”

“I had the opportunity to visit Auschwitz-Birkenau for myself with a group of students from Rugby and I will never forget what I saw there. It is vitally important that future generations understand what happened both during the Holocaust and during other genocides, like the Rwandan genocide which happened less than 30 years ago. Holocaust Memorial Day is a chance for all of us to reflect on the lessons of history and collectively pledge to never allow these tragedies to happen again.”

“As the Holocaust fades from living memory, it falls on all of us to ensure that their stories and the stories of the 6 Jewish million men, women and children brutally murdered by the Nazis and their collaborators, are never forgotten. We all have a duty to remember the Holocaust and to stand up against antisemitism and hate, now more than ever.”

Holocaust Memorial Day was established following an MP’s visit to Auschwitz-Birkenau with the Holocaust Educational Trust. Moved by his visit, Andrew Dismore MP proposed a bill, “to introduce a day to learn and remember the Holocaust” on 30 June 1999.