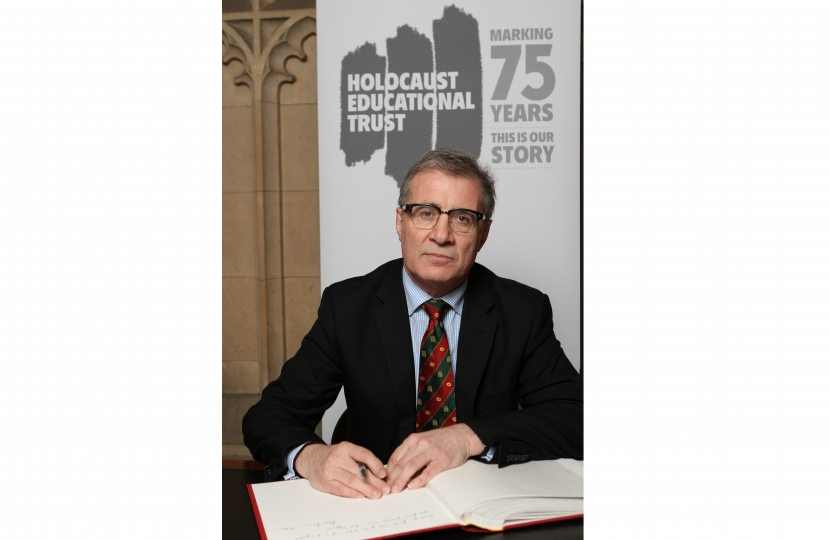 Rugby MP Mark Pawsey has signed the Holocaust Educational Trust’s Book of Commitment to remember those who were murdered during the Holocaust 75 years ago.

Mark joined MPs from across Parliament in pledging a commitment to Holocaust Memorial Day, which honours the victims of the Holocaust and pays tribute to the extraordinary Holocaust survivors who work tirelessly to educate young people today. Mark also paid tribute to the victims and survivors of the 1994 Rwandan genocide, some of whom he has worked with through the Conservative Party’s Project Umubano.

In the lead up to and on Holocaust Memorial Day, thousands of commemorative events will be arranged by schools, faith groups and community organisations across the country, remembering all the victims of the Holocaust and subsequent genocides. The theme for this year’s commemorations is ‘Stand Together.’

Speaking after signing the Book of Commitment, Mark said:

“I will never forget visiting Auschwitz-Birkenau with a group of students from Rugby. It is vitally important that future generations know what happened. Holocaust Memorial Day is a chance for all of us to reflect on the lessons of history, both of the terrible events of the Holocaust and on other genocides which have happened since.”

“As the Holocaust moves from living history, to history, it becomes ever more important that we take the time to remember the six million victims and also pay tribute to those who survived these horrors. We must also remember subsequent genocides of the 21st century, including the Rwandan genocide. Through my work with Project Umubano, a Social Action Project run by the Conservative Party, I have met Rwandans who survived those atrocities and been able to play a small role in helping their community.”

“As the Holocaust moves further into history, it falls on all of us to ensure that their stories and the stories of the 6 Jewish million men, women and children brutally murdered by the Nazis, are never forgotten. We all have a duty to remember the Holocaust and to stand up against antisemitism and hate, now more than ever.”

Businesses in Rugby put their views on the Government’s response to the Coronavirus outbreak to MP Mark Pawsey on a video conference organised by the Coventry and Warwickshire Chamber of Commerce.

More information about the Holocaust Educational Trust is available at: https://www.het.org.uk/