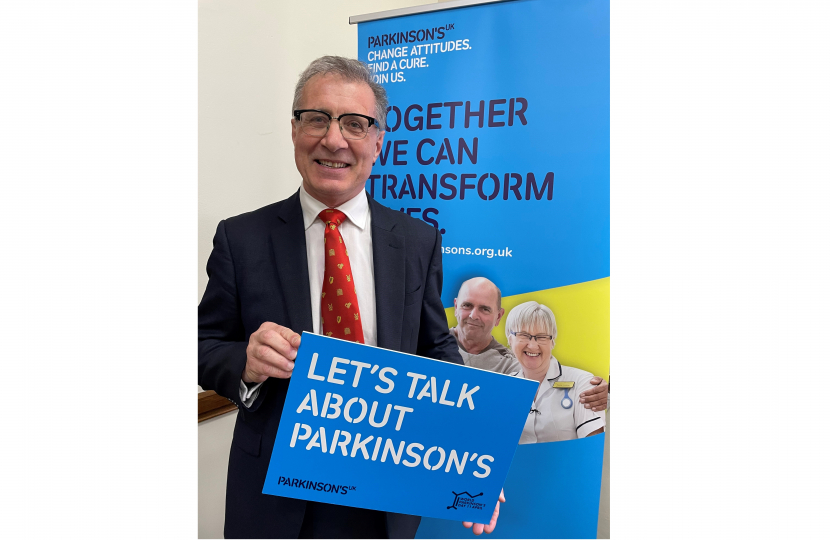 Local MP Mark Pawsey, who is President of the Rugby Branch of Parkinson’s UK, has shown his support for the Parkinson’s community on World Parkinson’s Day, 11 April.

Parkinson’s is the fastest growing neurological condition in the world and currently there is no cure. To demonstrate his support, and hear from those who are affected by the condition, Mark attended Parkinson’s UK’s Parliamentary drop-in session. Because Parkinson’s has more than 40 symptoms, everyone’s experience is different, making it hard for people to understand without first-hand experience. The session was designed to start conversations and increase understanding among MPs and members of the House of Lords of what it’s like to live with Parkinson’s or as the carer of someone with the condition.

The session was held as part of this year’s activities to mark World Parkinson’s Day. This year, members of the Parkinson’s community chose to encourage people to Talk About Parkinson’s to increase visibility and understanding of the condition. As President of the Rugby Branch of Parkinson’s UK Mark has met with those in Rugby and Bulkington to hear from them about the impact of the pandemic on those with Parkinson’s.

Speaking after the meeting in Parliament, Mark said:

“It was incredibly important to hear directly from those with Parkinson’s. The complexity of the condition coupled with the impact of the restrictions on the clinically vulnerable during the pandemic was clearly extremely challenging. It was also important to hear about the challenges families face in accessing timely, high-quality Parkinson's care. This demonstrates there is much we can all do to show our support for people living with Parkinson’s and their families.”

“As the President of the Rugby Branch of Parkinson’s UK, I fully understand the importance of making sure that those affected by Parkinson’s, and their families, are able to access timely support. I hope that through talking about Parkinson’s this World Parkinson’s Day, we can start to address that. If more people understand Parkinson’s, they can support people in their local communities, improve health and care services, help fundraise, and, ultimately, get us closer to that cure.”

“We’re incredibly grateful to Mark for coming along to Talk About Parkinson’s and pledge to support constituents affected by the condition in Rugby and Bulkington. One thing that we know is that not enough people really understand Parkinson’s. They don’t know it’s a serious condition, that treatments are limited and that there is no cure. They don’t realise just how much people with Parkinson’s and their loved ones have to fight to access the care and support they are entitled to.”

The website for the local branch and support group of Parkinson’s UK in the Rugby area is available at: https://parkinsons-rugby.org.uk/