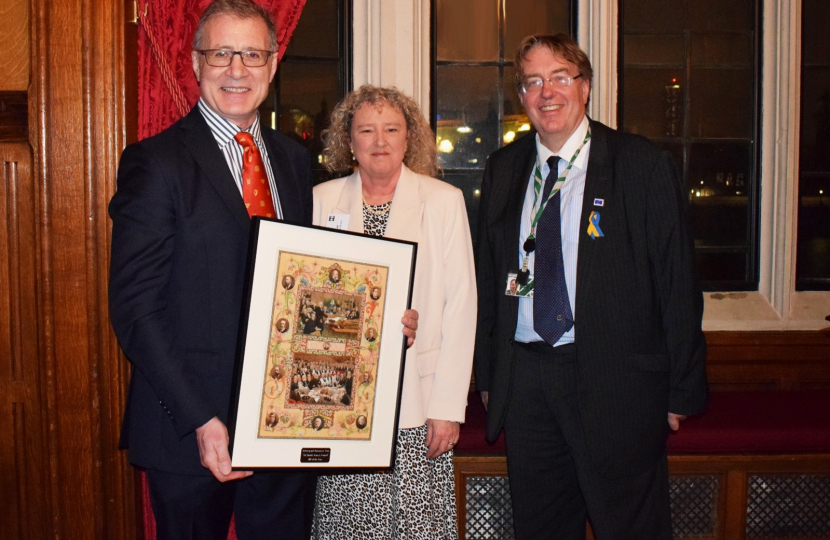 The Industry and Parliament Trust has awarded Rugby’s MP Mark Pawsey the “MP of the Year” award in recognition for his contributions in Westminster to supporting businesses, innovation, and manufacturing within the UK.

The Industry and Parliament Trust (IPT) is a non-lobbying, independent charity that works on a cross-party basis to build engagement between MPs and UK businesses. They work to ensure that MPs understand commerce and industry and enable businesses of all sizes and sectors to engage effectively with policy making and the legislative process.

Through this work, Mark has spoken with and on behalf of businesses and industry within Parliament and offered crucial insight thanks to his background running a small business for 25 years in Rugby. He was recognised by the IPT with the MP of the Year Award, which this year was awarded in the memory of Sir David Amess MP who had chaired the IPT Board for a number of years before his senseless murder at his constituency surgery in September 2021.

“It was a great honour to be awarded MP of the Year by the Industry and Parliament Trust. Having established and run a business here in Rugby prior to entering Parliament, I fully appreciate the challenges facing businesses and the need for Parliamentarians to regularly engage with the business community. This takes the form of regular meetings and round table discussions, enabling Parliamentarians and businesses to better work together. Such collaborative work is important to ensure that our legislative approach enables business, and therefore skills and growth, to flourish in the UK.”

“I was particularly moved by the award being presented by Gill Lee, who was the office manager for my colleague, Sir David Amess MP. I knew Sir David well as when I was first elected to Parliament, our offices were close together on the same corridor and he provided much valuable advice to me and to other colleagues. His shocking murder last year was a great loss to Parliament, and it is only right that his memory and work lives on by dedicating this award to Sir David.”