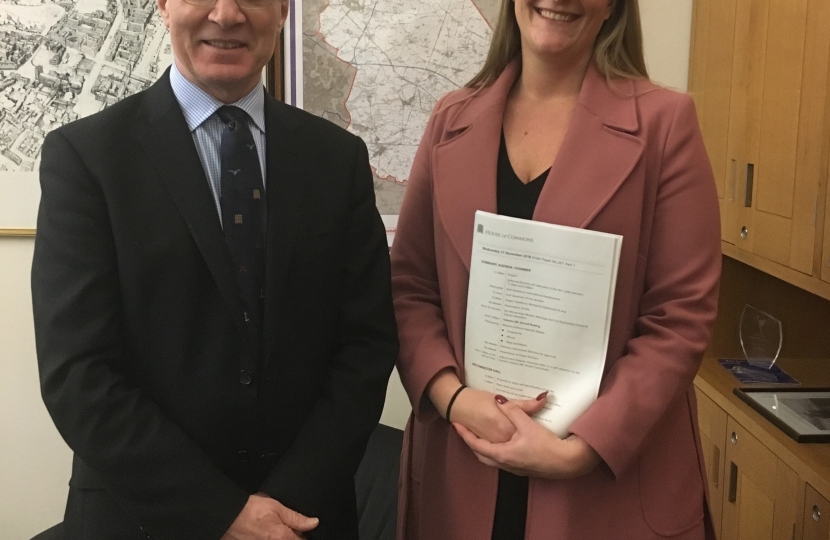 Rugby resident Clara Wicks had the opportunity to shadow local MP Mark Pawsey around the corridors of power as part of a massive event aimed at encouraging more women to stand for election.

The initiative saw more than 250 inspiring women from all parts of the country come to Westminster to highlight the need for more women in politics. Despite considerable progress, today only one in three politicians are women.

On 21 November 1918, just days after the Armistice, the Qualification of Women Act was passed, allowing women to stand for Parliament for the first time. The shadowing day, organised by campaigners Frances Scott; 50:50 Parliament; Helen Pankhurst and the Centenary Action Group; the Fawcett Society; and the Jo Cox Foundation, is a celebration of the Act and a call for more women to come forward.

Since then there have been only 491 women MPs compared to 4,503 men. The ‘Ask Her to Stand’ event was aimed at closing this gap and ensuring that Parliament is more representative of the country as a whole.

Clara and the other women taking part in the day spent time shadowing their MP and seeing first-hand what it means to be a Member of Parliament. They also took part in workshops, were able to watch Prime Minister’s Questions and to get a full picture of what it means to service in political office.

“I was delighted to meet Clara and give her some insight into life at Westminster, which I hope will inspire her and other women to stand for political office in future. Encouraging more people from different backgrounds to stand for Parliament will mean greater diversity, which as the Prime Minister said to the House last week means that we will get better decisions made for everyone.”

“In my role as Group Equality, Diversity and Inclusion Manager at smart infrastructure solutions company Costain, I know the challenges of attracting more women into STEM (Science, Technology, Engineering and Maths) industries.  There is a real drive to encourage businesses to embrace diversity, so I was shocked to learn that in Parliament, where laws are passed and the people are supposed to be represented, there isn’t gender balance.  Having the opportunity to spend the day with Mark showed me what an important and influential role being an MP is, and I was impressed by the broad range of topics he supports to further the interests of the people of Rugby.  It was also encouraging to see that Parliament and the political parties are striving to reach out to people from different backgrounds and experiences to join them, and I hope that more women and indeed men will be influenced to consider a career in politics.”

50:50 Parliament campaigns for a better gender balance in Parliament. Find out more at https://5050parliament.co.uk