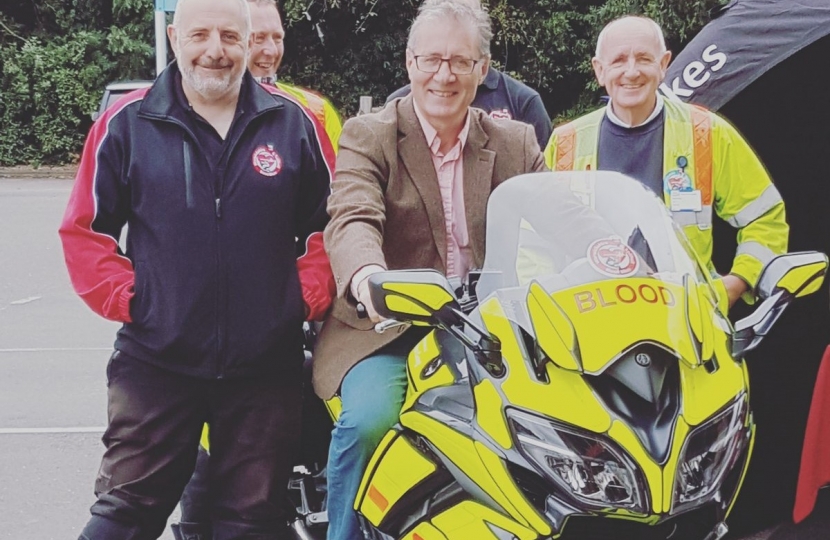 Rugby MP Mark Pawsey joined staff and shoppers at Sainsbury’s Rugby superstore to celebrate the launch of their Local Charity of the Year for 2018, which will be backing the Warwickshire and Solihull Blood Bikes.

Every year, Sainsbury’s stores across the country select local charities which they support both through fundraising, volunteering and raising awareness of the work of the charity. This year, the Rugby store is working to raise money for the Warwickshire and Solihull Blood Bikes, who support the NHS by transporting blood, tissue samples and vital supplies outside of office hours.

The Warwickshire and Solihull Blood Bikers have been operating since 2012 and have completed over 6,300 calls since they were founded – an average of 3 calls per night. They have previously been supported by Triumph Motorcycles, who have provided two motorcycles, however the group now has to provide their own bikes. It is hoped that the fundraising by Sainsbury’s staff and customers will be able to help Warwickshire and Solihull Blood Bikes to buy a new motorcycle to continue their work.

Last year, Sainsbury’s staff and customers raised over £1.2 million for good causes throughout the country. The Local Charity of the Year scheme is now in its 10th year and alongside the Rugby store over 1,300 other stores are also backing a local charity.

Speaking after the Sainsbury’s Local Charity of the Year launch, Mark said:

“Earlier this year I met with the Blood Bikes at Rugby Bikefest, so I was delighted when I discovered that they had been chosen by local Sainsbury’s staff to be their Charity of the Year 2018. The Blood Bikes operate at times of day when most of us are fast asleep, but their work really does save lives.”

“The Blood Bikers are all volunteers and as such, they rely on the generosity of local people to ensure that they can keep on riding to get blood, tissue and other vital medical supplies to where they need to be. They also free up NHS resources, such as ambulances, which would otherwise need to safely transport lifesaving equipment, to respond to emergency calls. It is great to see them getting support from Sainsbury’s this year and I hope that more bikers in Rugby might consider getting involved.”

“We’re thrilled to launch our new partnership with The Warwickshire and Solihull Blood Bikes and welcome Mark Pawsey MP to the store. The charity makes a real difference in people’s lives and we’re really delighted to be working together over the next year to give back to the local community. Thank you to everyone who voted and watch this space for ways you can get involved.”