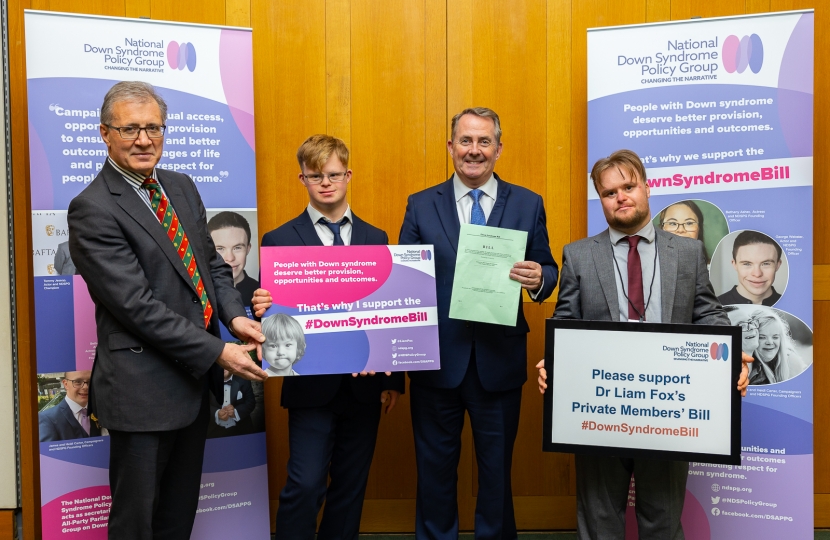 Rugby and Bulkington MP Mark Pawsey has joined MPs from across Parliament in supporting the new Down Syndrome Bill which passed it’s second reading in the House of Commons on Friday 26 November.

As well as Mark and many of his Parliamentary colleagues, the Government has announced it will support the Down Syndrome Bill.  This means the Down Syndrome Act 2022, once passed, will improve provision and outcomes for all those living with Down syndrome in England.  This will encompass, amongst other areas, maternity care, education, health, social care and employment.

Mark met with both Dr Liam Fox and the National Down Syndrome Policy Group ahead of the Bill being debated last week to learn more about how this legislation will support many of the approximately 47,000 people in the UK who have Down syndrome. Mark also attended the debate and spoke about the work taking place in Rugby with local charity New Directions to provide support to local residents with Down syndrome.

Speaking after supporting the Down Syndrome Bill, Mark said:

“I was delighted to be able to support the Down Syndrome Bill in Parliament. For the first time people with Down syndrome are beginning to outlive their parents. If we do not make provisions for this then there will be evitable human tragedies. Not only does this Bill give us an opportunity to address this situation, but we can go much further ensuring those with Down syndrome can access Health, Education and Social Care services.”

“I also want to take this opportunity to pay tribute to the great work taking place at New Directions in Rugby, where they provide vital and life-changing support to many families here in Rugby, including those with Down syndrome. I have met with New Directions a number of times in order to understand their work and I hope that this new legislation will enable them to better help many in our community with Down syndrome.”

Mark’s contribution to the debate on the Down’s Syndrome Bill is below:

I congratulate my right hon. Friend on introducing this Bill and securing Government support for it. He gave a roll call of organisations that support people with Down’s syndrome, many of which are local. I wish to give credit to the great work of New Directions in my constituency and the support it provides to people with Down’s.

I am grateful to my hon. Friend, who is correct in what he says. I am sure that Members who speak in this debate will wish to highlight charities and other groups in their constituencies that play a major supportive role and without which parents would find it much more difficult, as would people with Down’s syndrome, if that help were not there. We could all spend pretty much all day going through a range of different groups, and I reiterate that if I have omitted any in my introduction, I apologise for doing so.