Rugby charity gets a Royal seal of approval 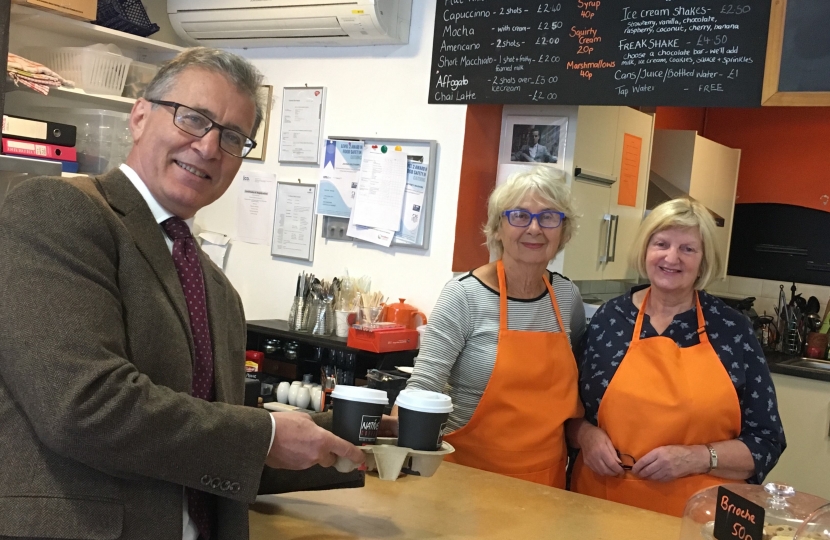 Mark Pawsey MP has praised the great work of Rugby charity Futures Unlocked after they were awarded the Queen’s Voluntary Service Award and called on the Government to do more to help prisoners find work before they are released.

Mark’s comments came during Justice Questions in the House of Commons when he spoke about the award and the charity’s work at Moriarty’s Community Café in Rugby town centre. Futures Unlocked works with ex-offenders to help them re-adjust to life outside of prison, providing them with mentoring, advice and support to enable them to lead crime free lives. Thanks to them, only 35% of their clients reoffend, compared to the 49.7% national average.

Futures Unlocked has been honoured this year with the Queen’s Voluntary Service Award – the highest award which can be bestowed upon volunteer organisations. It recognises organisations which provide a service for local communities and which are run by volunteers.

In the House of Commons, Mark praised the work of Futures Unlocked and aske the Minister of State for Justice, Robert Buckland QC MP what more could be done to build on Futures Unlocked’s success. The Minister highlighted the work the Government is doing through the New Futures Network, which is working to reform prisons and broker partnerships with employers to provide opportunities before prisoners are released.

“I’ve visited both Moriarty’s café and Futures Unlocked to see for myself how the work of their volunteers helps those leaving prison to find their feet again. I am really pleased that the Minister has congratulated Futures Unlocked for their work and it is good news that the new futures network will bring together employers, prison officials and the voluntary sector to try and continue to reduce re-offending.”

More information about the work of Futures Unlocked can be found at: https://futuresunlocked.org/