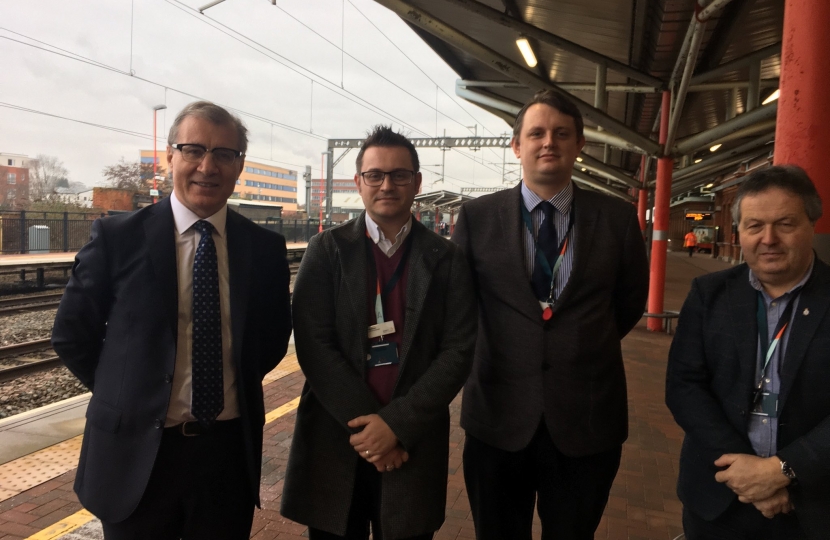 The line was closed in the 1960’s under the Beeching Cuts, but the proposals put forward by Sustainable Transport Northamptonshire would seek to reconnect the old railway line between Rugby and Leicester. In supporting it, Mark has highlighted the benefits it would create for the local road network by providing an alternative to HGV traffic and taking freight off the roads. The restored line would also integrate both Rugby Station and the proposed new parkway station at Houlton, bringing more services for local residents.

The project would see the railway line following its original position on the Great Central railway adjacent to the M1 motorway before linking up with the Birmingham to Leicester line near the existing Narborough station.

The plans have been put forward by campaigners to the Government’s ‘Restore Your Railway Fund’, which seeks restore lost rail connections. The proposals have been submitted to the first stage of the fund which would allocate further resources under an ‘Ideas Fund’ to explore the feasibility of the route. The proposals were formally submitted in the latest round of applications and both Mark and Alberto Costa, MP for South Leicestershire have given the project their backing. The proposals have also been supported by the Rugby Rail Users Group.

“This is a really exciting project to restore the historic Rugby to Leicester line, which would help boost regional connectivity and I am very pleased to be supporting it. I believe that this line would be very beneficial in removing HGV freight from the local road network in and around Rugby. This would not only help ease the congestion on key roads such as the A5, but is also significantly better for the environment as rail freight produces as much as 76% less CO2 than road haulage.”

“Alongside the improvements and investment in new stations as a result of this project, I also wish to see additional investment at Rugby Station. We have a great station in the heart of the town, however there are longstanding challenges regarding access and parking. I will continue to work with the operators of Rugby Station, as well as local government and others to secure this investment. If this bid to reopen the Leicester to Rugby line is successful, as I hope it will be, then there is an even greater case to continue to invest in our local station.”

“It's just over fifty years since the direct rail link between Leicester and Rugby was closed. During that time, demand for passenger travel and freight has grown spectacularly, and Rugby Rail Users Group (RRUG) is pleased to support the Restoring Your Railway proposal to re-establish this connection. The proposed route seems ingenious, useful and realistic. It restores a railway station to Lutterworth and provides a route for Rugby passengers not only to Leicester, but to Nottingham and beyond. The new settlements at Houlton and Lutterworth East will also be well-served by the link, adding to the journey possibilities. The proposed freight capacity will take pressure off local roads such as the busy A5 and relieve the congested West Coast Main Line between London and Rugby. In addition, the environmental credentials of the proposal are strong, as it effectively rides along next to the hard shoulder of the M1, minimising any impact. The proposed route has been specifically chosen so that it does not impinge on any part of Rugby’s Great Central Walk.”

Pupils at one of the country’s newest schools should get ready to embrace a ‘wonderful educational opportunity’, according to a senior cabinet minister who visited the school alongside Rugby MP Mark Pawsey.