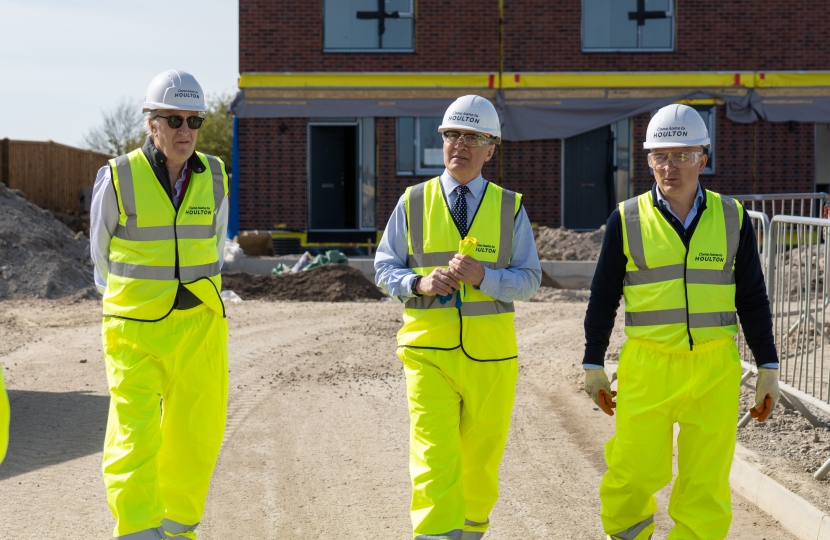 Rugby MP Mark Pawsey spoke in Parliament this week about how the new Planning Bill, announced in the Queen’s Speech, will help to meet the Government’s ambitious target to deliver 300,000 new homes a year.

During the penultimate day of debate on the Queen’s Speech, titled “Affordable and Safe Housing for All,” Mark praised Rugby Borough Council for the proactive approach the authority has taken in developing a Local Plan. Having such a Local Plans in place, which the Government wants to see adopted by all authorities, enables development to take place in areas identified for growth and alongside the broader provision of infrastructure, including schools and health services.

In his speech Mark said that an exemplar for this type of development was the new Houlton site, which has been master planned by Rugby Borough Council and Urban&Civic. Once complete, Houlton will provide not only a mix of high-quality housing, but also on site provision of new schools and a district centre with a GP surgery.

Mark also highlighted that according to the most recent figures available, the net increase in housing in Rugby was 25% higher than the country as a whole. Mark noted that if the rest of the country had delivered new homes at the same rate as Rugby, we would be much closer to achieving the Government’s target of 300,000 new homes a year.

This proactive approach was welcomed by Housing Minister Chris Pincher, who closed the debate. The Minister said that the Government hoped to “end the glacial pace of planning by mandating every council to have up-to-date local plans, as called for by my hon. Friend the Member for Rugby.”

“The new Planning Bill which the Government announced during the Queen’s Speech will be an important piece of legislation to help deliver the new homes we need. The current system dates back to the 1940’s and is largely unchanged from what I studied at university, so reform of this outdated process is well overdue. The proposals for areas of growth are ones which Rugby has used in it’s local plan making process and if other authorities adopting this positive approach it will help deliver the next generation of housing.”

“It is also vital that as we build new homes for future generations and give them the chance to own their own home, we ensure that the right infrastructure and services are delivered alongside them. Reforming the planning process to enable areas to be developed at scale, as we are seeing locally, means that we can get homes suitable for all our residents.”

“As we bring forward these proposals, we need to ensure that the current democratic involvement is strengthened and not diminished. That means continuing to effectively empower local authorities to be able to lead on development and deliver the most appropriate locations for housing in their area.”

In Parliament I was able to present the petition, signed by over 4,300 local residents, calling on the West Midlands Ambulance Service to abandon their proposals to close Rugby Community Ambulance Station.

The full transcript of Mark’s speech during the debate can be found here.