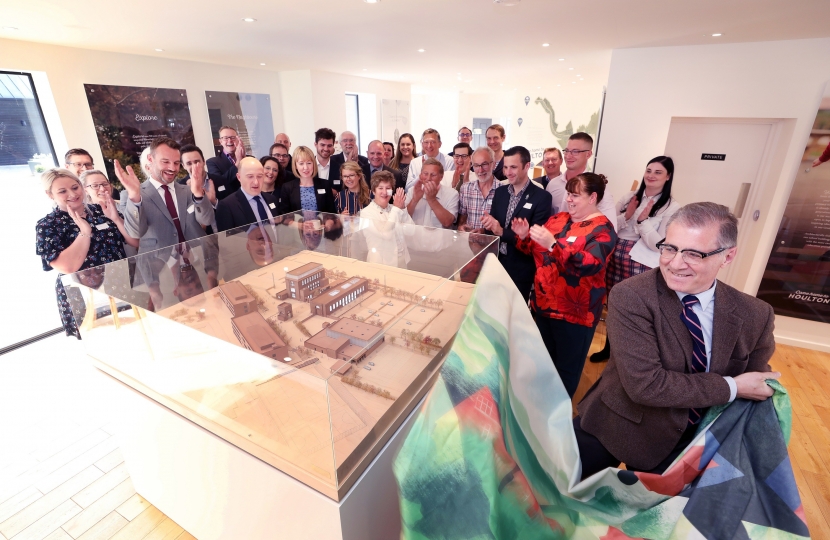 Local MP Mark Pawsey joined Houlton residents, developers Urban&Civic and teachers from the Transforming Lives Education Trust for the unveiling of the new secondary school, which will welcome new students by 2021.

Houlton School will be a key centrepiece in the making of a new community at Houlton. Its design will represent an iconic new school which will incorporate the Grade II listed C Station which formerly occupied the site at Houlton.

To mark this occasion residents from the growing community at Houlton came together as Mark revealed a large-scale model of the school to help people get a feel for what the school will be like.

Houlton school is the second school of four schools which will be built across the Houlton development. The secondary school will be run by the Transformation Lives Educational Trust, which currently runs Ashlawn School.

Since the beginning, Local MP Mark Pawsey has praised the plans to build a secondary school in Rugby. Mark commented:

“Watching Rugby's newest community develop at Houlton is always a delight, and the new school they have unveiled today will be a great addition to not only the new residents of Houlton, but also to the whole of Rugby.”

“The school pays tribute to the heritage of the Rugby Radio Station that it is based on, and it will ensure that future generations learn not only the skills they will need for the future, but also the history of our community. I am also really pleased that the Transforming Lives Education Trust will be running this new school and taking forward the ethos which has led to Ashlawn School being a great success story to the new community of Houlton.”

“We have had a really positive response to our designs for the school, both from prospective pupils and parents as well as the wider Rugby community. Our architects have sensitively and cleverly fulfilled the brief of providing a modern, spacious and inspiring place in learn whilst preserving the integrity of the building’s existing features and retaining some important reminders of its days as the world’s most powerful radio station. It is going to be a fantastic and iconic new school for Rugby as well as an important centrepiece in the creation of our new community at Houlton.”