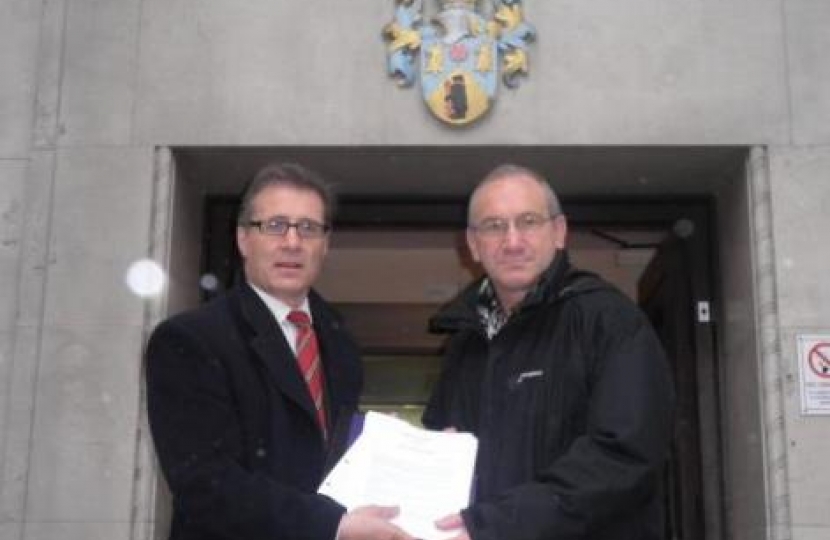 Rugby MP Mark Pawsey joined with local residents of Barnacle on Monday in their struggle against the illegal development of a traveller site in the village. Local residents were quick to notify authorities on Friday as attempts were made to develop land in the village without planning permission.  Over the weekend Rugby Borough Council officials swiftly sought, and obtained, an interim injunction preventing further work taking place at the site which they hope to make permanent in the High Court on later this week.

On Monday morning Mark met with Barnacle resident representative Gareth Jones at Town Hall, Rugby, to present Deputy Chief Executive Ian Davis with a petition signed by residents and friends of Barnacle supporting the council’s action in regards to the site.

Later on Monday Mark Pawsey arranged an urgent meeting in Westminster with a representative of Eric Pickles MP, the Secretary of State for Communities and Local Government, to discuss the matter and when he presented the resident’s petition.

“The residents of Barnacle are victims of a loophole in present legislation which is allowing camp dwellers to gain a permanent home by the back door.”

“I felt it was important to bring this matter to the Minister’s attention. In statements he has made it clear that the new Government will be bringing in stronger powers for councils to tackle unauthorized developments. Residents in villages such as Barnacle appreciate the Government’s more robust approach and want to see measures implemented at the earliest opportunity to deal with this issue.”