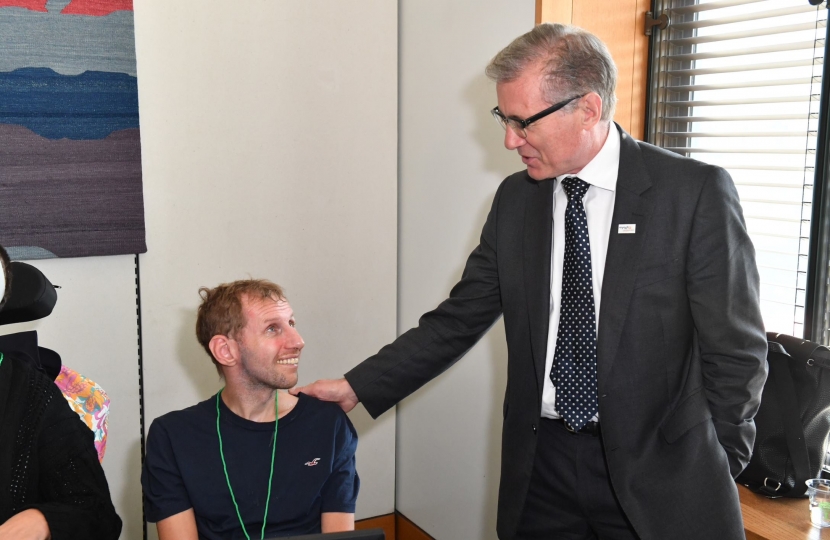 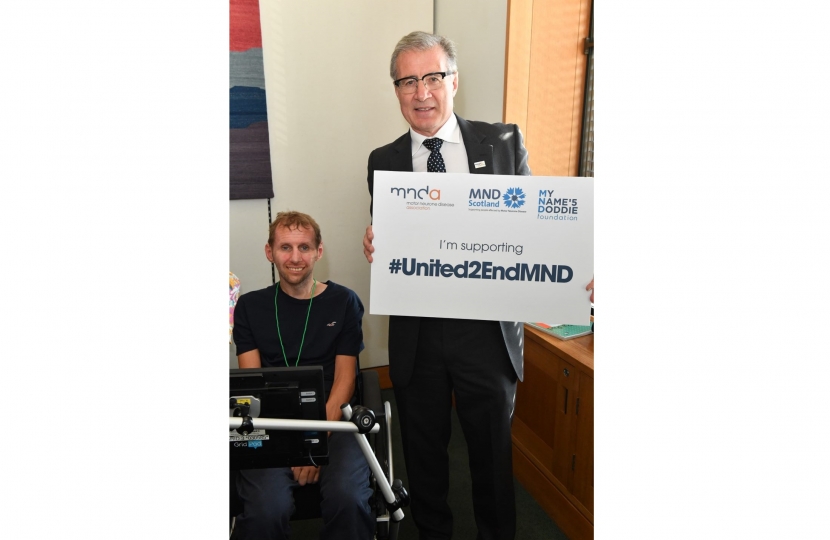 Mark Pawsey, MP for Rugby met with a number of people living with Motor Neurone Disease, including former rugby player Rob Burrow, on the final stage of their journey to Downing Street to deliver a letter on behalf of hundreds of people who are living with motor neurone disease.

The letter, which was sent on its way by Doddie Weir from his farm in the Scottish borders, and signed virtually by people across the country, urged the Government to inject £50 million into targeted MND research.

The call comes from a coalition of MND charities – the MND Association, MND Scotland and My Name’5 Doddie Foundation – people living with MND and leading neurologists.

Many of the leading lights in the coalition were on hand to meet Mark Pawsey at a reception at Westminster before the letter continued on the final leg of its relay to Number 10. It was handed in by a delegation including Rob Burrow MBE, Stephen Darby, former West Midlands Police Assistant Chief Constable Chris Johnson and Nicola Waters, a leading figure in the campaigning coalition.

Their letter, which has been delivered to No 10 Downing Street, says that: “MND is a death sentence. We will all die of the disease because there are no treatments to help us. However, research has now reached a point where a cure or life-saving treatments can be found.”

After meeting with the delegation, Mark said:

“It was a real privilege to be able to meet some brilliant sportspeople in Parliament last week, who are courageously living with MND. I remember fondly watching Rob Burrow playing rugby league across many years.”

“I am very pleased to be supporting the call for increased research funding into this disease and have written personally to the Secretary of State for Health asking for a cash injection of £50 million to help establish the UK as a leading player in the global field of neurological research. In recent years, funding for targeted MND research via the National Institute for Health Research and the Medical Research Council has stood at less than £5 million per year.  This is not enough to keep pace with unprecedented advances in science, medicine, and technology.”

“It was good to hear that the bid has widespread support and the recent petition on MND research funding which was signed by over 110,000 people included 215 of my constituents. I will continue to support those with MND wherever I can and have written to the Secretary of State for Health and Social Care asking him to support the funding bid for research into MND treatment.”

• MND is a fatal, rapidly progressing disease that affects the brain and spinal cord.

• It attacks the nerves that control movement so muscles no longer work. MND doesn’t usually affect senses such as sight, sound, feeling etc.

• It can leave people locked in a failing body, unable to move, talk and eventually breathe.

• Over 80% of people with MND will have communication difficulties, including for some, a complete loss of voice.

• It affects people from all communities.

• Around 35% of people with MND experience mild cognitive change, in other words, changes in thinking and behaviour. A further 15% of people show signs of frontotemporal dementia which results in more pronounced behavioural change.

• It kills a third of people within a year and more than half within two years of diagnosis.

• A person’s lifetime risk of developing MND is around 1 in 300.

• Six people per day are diagnosed with MND in the UK.