Mark Pawsey MP pledges to back Local Pubs in Rugby 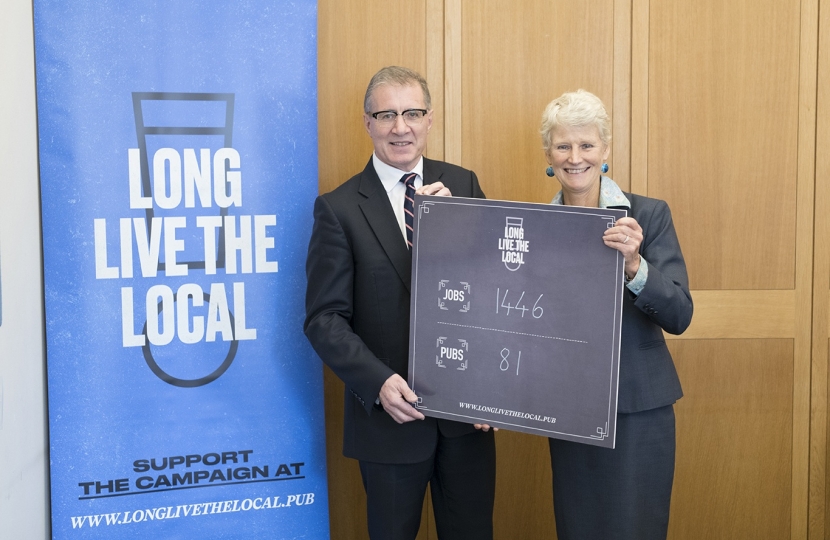 Mark Pawsey MP has today pledged his support for the Long Live the Local Campaign to help pubs in Rugby keep their doors open. Mark joins the more than 100,000 people who have signed the petition so far, including 190 in Rugby.

Mark is calling on the Chancellor to cut beer tax at the Budget. With £1 in every £3 pounds spent in UK pubs going to the taxman, British drinkers now pay 40% of all beer tax across the EU, but drink only 12% of the beer.

Brewing and pubs in Rugby support 1,446 jobs, including 454 young people - many of whom will have their first taste of the world of work behind the bar. Overall the pub sector contributes £43.1m to the local economy.

Commenting on the campaign, Mark said:

“Pubs are at the heart of communities across Rugby, but with three British pubs closing their doors for good every day the Government look carefully at a cut to beer duty. I’m supporting the Long Live the Local campaign and calling on the Chancellor to cut beer tax at this year’s Budget to support pubs in our local communities.”

“Many local residents will be aware of the great role played by local pubs throughout the constituency, with Rugby being home to a number of award winning pubs. These include The Merchants, who were voted ‘Best pub in Britain to watch the game of Rugby’ earlier this year and The Bull in Brinklow, whose ‘Red Letter’ marketing campaign last Christmas earned them runner up in the Ei Group Awards for Best Marketing Initiative.”

“As well as creating local jobs in pubs and breweries throughout the area, Rugby’s pubs are also home to a thriving music scene with local bands performing every week. This shows how pubs can provide opportunities for people throughout the area and it was a great pleasure to support the Long Live the Local campaign in Parliament.

“Beer duty has increased by 60% over the last 17 years and now the UK has one of the highest rates of tax in Europe. When over two thirds of all alcoholic drinks purchased in the pub are beers, a cut in beer tax would go a long way to protecting pubs across Rugby. We are very grateful to Mark Pawsey for their support for the Long Live the Local campaign, and hope that the Government listens to MPs across Parliament and the thousands of people across the country who are calling for a cut in beer tax to protect our pubs.”