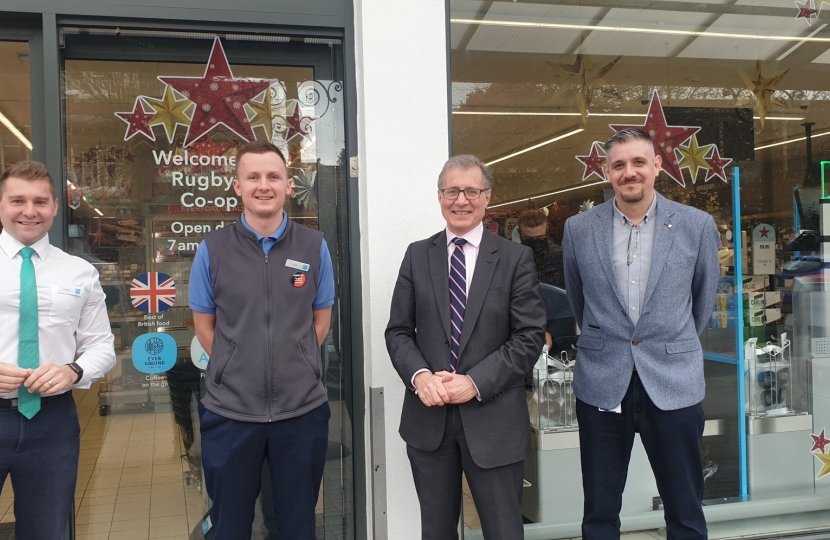 Rugby and Bulkington MP Mark Pawsey spent time at the Co-op’s new Rugby store on Clifton Road in a show of support during Respect for Shopworker’s Week.

Frontline shopworker’s have played a key role throughout the pandemic, however levels of violence, abuse and anti-social behaviour affecting all retailers, both large and small, have shockingly never been higher. Retail trade union Usdaw has unveiled concerning statistics from their annual survey during this year’s annual Respect for Shopworkers Week, 15-21 November, and found that in the last 12 months 89% of shopworkers had experienced verbal abuse and 64% had been threatened by a customer. On top of this, the latest figures from the British Retail Consortium’s (BRC) Annual Crime Survey showed that violence and abuse against staff has risen to over 450 incidents a day.

During the annual Respect for Shopworkers Week Co-op is working to raise awareness of USDAW’s Freedom from Fear Campaign and promote a message of ‘respect for shopworkers’. Co-op is also campaigning for a new protection of workers law in England and Wales, based on legislation that came into force in Scotland earlier this year.

Co-op has invested over £140m in the latest technology to keep colleagues safe over the past five years and continues to do all it can to protect colleagues. This includes introducing the latest in remote monitored CCTV and body-worn cameras that can send real time audio and visual footage to its security operations centre at the touch of a button. The retailer believes that there is a real opportunity for Government to use their own Police, Crime, Sentencing and Courts Bill to provide shopworkers in England and Wales with the same protection that the Scottish Parliament have provided for colleagues in Scotland.

“Retail workers have been on the frontline over the past 18 months, providing an absolutely vital service even at the height of the pandemic. Any violence or abuse against them is totally unacceptable, and those who do so should be met with the full force of the law. I wanted to thank the staff at Rugby’s Co-op for what they do and show my support during Respect for Shopworkers week. I was very concerned to hear from those who have experienced violence or abuse whilst working, and I will be raising these issues with my colleagues in Government as the Police, Crime, Courts and Sentencing Bill comes before the House of Commons.”

“Shopworkers work at the heart of communities and played an amazing role, especially throughout the pandemic, and so we are delighted that Mark was able to meet and talk to frontline colleagues. While the majority of customers are fantastic, and really value the role their local store plays in the community, the abuse and assaults that frontline shopworkers can face on a daily basis should not be part of the job. It is not just the physical impact on colleagues, but their mental wellbeing too. We have had colleagues pushed, shoved, spat at and threatened with knives. Shopworkers should be able to carry out their role in local community life free from fear. And, while we are doing all we can, we also call for a specific shopworkers’ law, I believe it will send out a clear message and start to bring about a change in the perception that it is ok to attack and abuse shopworkers.”