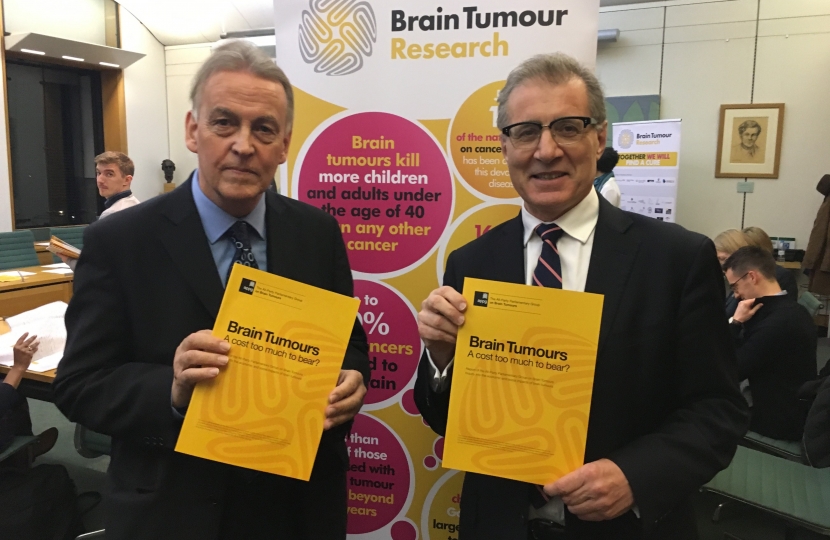 Rugby resident Peter Realf has contributed to a ground-breaking report of the All-Party Parliamentary Group on Brain Tumours which has been backed by local MP Mark Pawsey.

Peter Realf, whose son Stephen tragically passed away aged just 26 because of a brain tumour, has campaigned for greater awareness of both the impact of brain tumours on patients and their families, as well as for much greater research into treating brain tumours.

The report highlights that in the past 30 years survival rates for brain cancer patients remain largely unchanged, despite great progress in treating other forms of cancer. Furthermore, brain tumours cause the deaths of more people under 40 than any other cancer and the costs – physically, emotionally and financially - can be devastating for families.

All-Party Parliamentary Group on Brain Tumours report, ‘Brain Tumours – A cost too much to bear?’ features testimonials from those who have had brain tumours and their families, including Peter’s. It also contains a number of recommendations and findings which it asks the Government to implement in order to help those diagnosed with brain tumours. These include greater funding for research, additional support through the welfare system and placing a particular emphasis on children and young people.

“I first met Peter shortly after I was elected in 2010 and at the time, I was not aware of the heart-breaking impact that a brain tumour diagnosis can have not only on the patient, but also their family. The Realfs have done incredible work to raise awareness of these issues and it was a petition set up by Peter’s daughter, Maria, which paved the way for first a debate in Parliament on brain tumours and eventually to this report.”

“In recent years we have seen a much greater understanding of the need to do more to help tackle all forms of cancer, but particularly brain tumours. I am very pleased that earlier this year the Government established the Tessa Jowell Brain Cancer Mission which will mean that in total, there is now £65 million committed to do more to research treatment – and hopefully a cure – for brain cancer.”

“I am very grateful to Mark Pawsey MP for taking time out of what must be one of the most busy weeks in recent Parliamentary history, to join me at the All Party Parliamentary Group on Brain Tumours (APPG-BT) once again, to collect his copy of the APPG’s new report entitled ‘Brain Tumours - A cost too much to bear.’ This MP led Inquiry looked at the financial and social costs of those affected by this devastating disease, and is looking at ways to support those living with a brain tumour today, whilst encouraging Government investment in research that is searching for a cure longer term.”

The All-Party Parliamentary Group on Brain Tumours report “A cost too much too bear” can be downloaded from: https://www.braintumourresearch.org/campaigning/inquiry