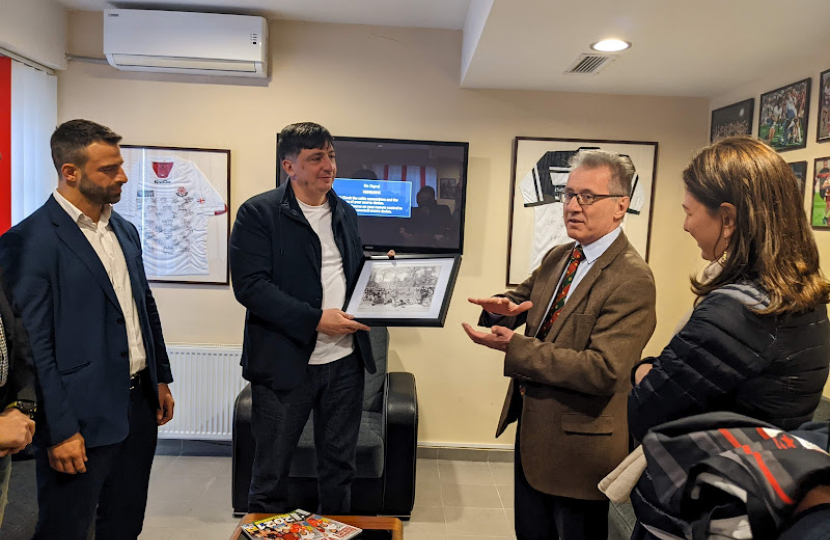 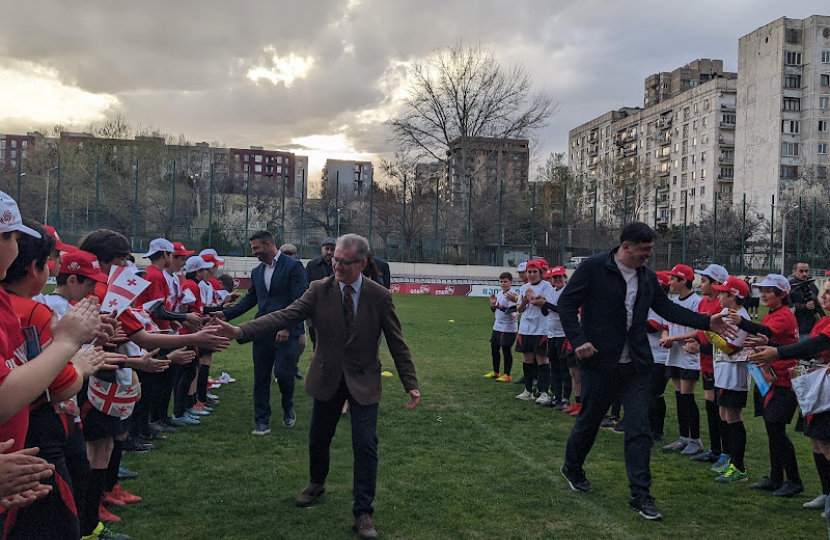 Rugby MP Mark Pawsey joined a cross-party delegation to Georgia during the Parliamentary recess which worked to strengthen the ties between the UK and Georgia, and to promote the game of rugby football which is a rapidly growing sport in Georgia.

The delegation was made up of MPs of the All-Party Parliamentary Group on Georgia, and included MPs from across the political spectrum. Whilst in Tbilisi, the Georgian capital, Mark and his colleagues met with Georgian political leaders, including Irakli Garibashvili, Prime Minister of Georgia, and senior members of the Georgian Parliament to discuss the links between the UK and Georgia. These links are of even greater importance in light of the Russian invasion of Ukraine in February 2022, and the ongoing Russian occupation of the Georgian regions of Abkhazia and Tskhinvali. Georgia and the UK have been close allies and 2022 marks the 30th anniversary of Georgian independence. In 2021, the two nations agreed the Georgia-UK Strategic Partnership and Co-operation Agreement and the Parliamentary delegation is another example of the ongoing co-operation and friendship between the UK and Georgia.

During the delegation’s visit Mark was able to meet with the Georgian Rugby Union President, Ioseb Tkemaladze, and Davit Kacharava, Chairman of the Georgian Rugby Board and Deputy Chair of the Sports Committee of the Georgian Parliament. Mark used the opportunity to discuss the rapid growth of the sport of rugby football in Georgia, whose international team is now ranked 12th in the world. Mark has already built links between the town of Rugby and Georgia following a visit by the Georgian Ambassador, H.E. Sophie Katsarava MBE, after she was invited to support a tournament between local schools for the 2019 Rugby World Cup where each school adopted one of the nations competing. Mark met with the Georgian Rugby Union at the Lelo Saracens Rugby Stadium, where the team is part of the Saracens Rugby Network, a demonstration of the links which sport can forge. The delegation also met with junior players who were training at the Lelo Saracens ground.

“Georgia is a great country and one which has made incredible progress in the 30 years since it regained its freedom from the USSR. Whilst there it was clear that Georgia views its future as one alongside Europe and NATO, and the UK firmly supports this aspiration. The Georgian people made us feel very welcome and it is clear that they have a thriving tourism and hospitality sector which is vital for their economy.”

“Georgia is also a rapidly growing nation in the game of rugby football and regularly compete at the international level. It was a pleasure to meet with the President and Chairman of the Georgian Rugby Board at Lelo Saracens, and the club’s connection to one of the English Premiership’s most successful teams is a great sign of the way sports can reach across borders and build links. It was also great to see their youth club and the enthusiasm the next generation have for the game of rugby, and I know that the Georgian team will continue to make their presence felt in international competitions.”