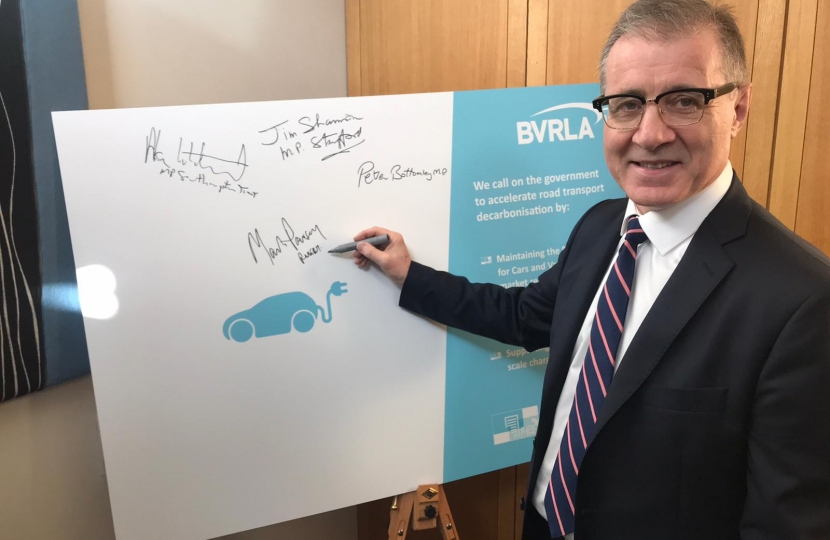 The coming years are vital for encouraging the take-up of electric vehicles in order to meet the Government’s ambitious new decarbonisation goals. Mark met with the British Vehicle Rental & Leasing Association in Parliament to discuss how the up-coming budget is an opportunity to set the tone for a new decade in which the transition to decarbonised road transport will be won or lost.

At the moment the Government provides incentives including the plug-in grant and tax reductions to encourage drivers to switch to electric vehicles. The BVRLA members represent nearly 50% of nearly all new vehicle sales each year. Encouraging their fleets to purchase electric vehicles is crucial to meeting the government’s target of no sales of petrol and diesel vehicles by 2035.

Speaking after a meeting with the BVRLA, Mark commented:

“I want to see the Government provide a clear support package for the electric vehicle sector over the coming years. I have already called on ministers to preserve the Plug in Car and Van Grants, maintain a strong set of tax incentives and tackle the high costs associated with fleet charging infrastructure.”

“As a member of the BEIS select committee I will be working hard to make the case to Government for increased investment to support electric vehicles. Switching to electric vehicles is a key part in our strategy to improve environmental standards and air quality. As such it is important the Government continues schemes such as the plug-in grant.”

“Electric vehicles are the future of the automotive industry and here in Rugby we have the London Electric Vehicle Company who are already manufacturing the new TX electric black cab. Each of these taxis reduces the CO2 emissions by 9.7 metric tonnes a year compared to a diesel. This shows how important it is to switch to electric vehicles.”