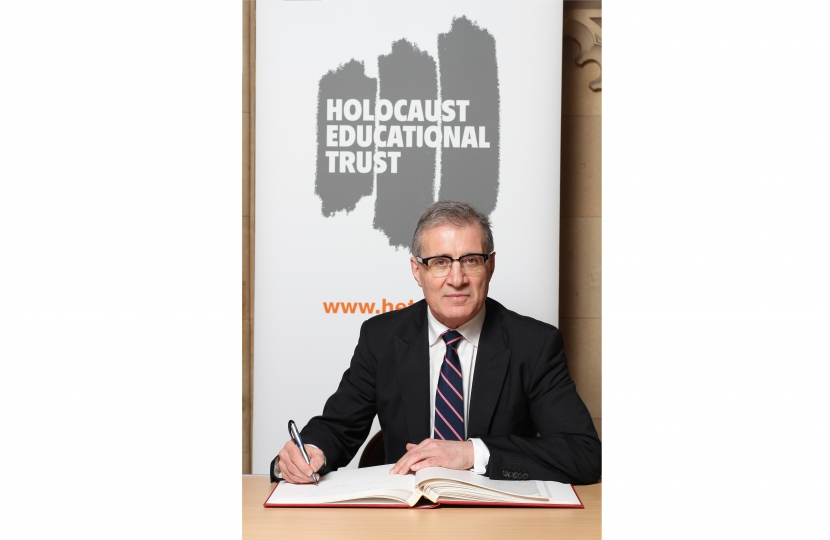 This week Rugby MP Mark Pawsey signed the Holocaust Educational Trust’s Book of Commitment, pledging his determination to remember those who were murdered during the Holocaust and other genocides throughout the 20th and 21st centuries.

Mark also paid tribute to the extraordinary survivors who work tirelessly to educate young people today. As part of the Conservative Party’s Project Umubano, a social action project in Rwanda, Mark worked with survivors of the Rwandan genocide to help the people living there to recover.

Holocaust Memorial Day is marked annually on 27th January, the anniversary of the liberation of the former Nazi concentration and death camp Auschwitz-Birkenau. In the lead up to and on Holocaust Memorial Day, thousands of commemorative events will be arranged by schools, faith groups and community organisations across the country, remembering all the victims of the Holocaust and subsequent genocides. The theme for this year’s commemorations is ‘Torn from Home’.

Speaking after signing the book of commitment, Mark said:

“Holocaust Memorial Day is an important opportunity for people from Rugby and Bulkington to reflect on the tragic events of the Holocaust. As the Holocaust moves from living history, to ‘just’ history, it becomes ever more important that we take the time to remember the victims and pay tribute to those who survived these appalling events.”

“I am a very strong supporter of the work of the Holocaust Educational Trust. Alongside a number of pupils from Rugby I have visited Auschwitz-Birkenau and I will never forget not only my visit, but also the terrible crimes that were committed there. I have also visited Rwanda to take part in charitable work there, helping those who survived the 1994 Rwandan genocide. As fierce conflicts continue to rage throughout the world, the work of charities such as the Holocaust Memorial Trust remains as important as ever and I would encourage local people to show their support on this important day.”

“The Holocaust did not start in the gas chambers but with hate filled words. Our mission is to educate young people from every background about the Holocaust and its contemporary relevance. We are very grateful to Mark for signing the Book of Commitment, signalling a continued commitment to remembering the victims of the Holocaust as well as challenging antisemitism, prejudice and bigotry in all its forms.”