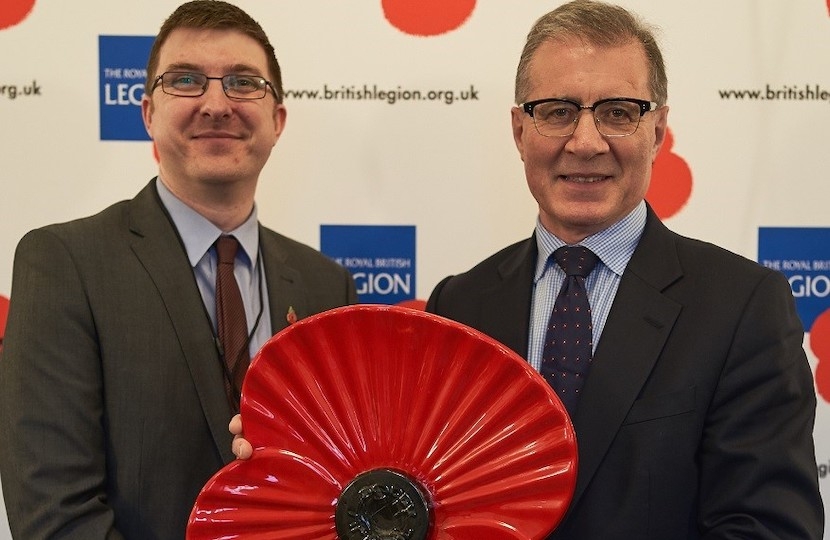 The Royal British Legion is the country’s largest Armed Forces charity, and provides welfare assistance for many thousands of veterans, serving personnel and their families. Mark attended a Legion event in Parliament to support the charity’s work, and met with local area Team Leader David Fairclough to discuss current issues facing the Armed Forces community.

Mark has previously backed the Hillmorton branch of the Royal British Legion after their parade last year was threatened with cancellation due to enhanced security requirements. Mark raised the importance of the parade to Hillmorton residents, over 1,000 of whom take part in the parade each year, during Prime Ministers Questions. Thanks to the support of Mark, Rugby Borough Council and the Hillmorton Councillors, the 2018 centenary parade in Hillmorton was a huge success.

Royal British Legion research has found that the biggest issues currently experienced by working-age members of the UK ex-Service community include hearing loss and difficulty finding employment; among over-75s, physical health and care are among the most common problems. The Legion successfully campaigned for a £10m hearing loss fund, supports career transition through its Civvy Street website and delivers practical assistance through community outreach services and six care homes.

“I enjoyed meeting staff from The Royal British Legion and learning more about the work being done in my local area. Members of the Armed Forces community make huge sacrifices in service of our country and I am proud to support the work of the Legion in honouring the memory of the fallen and building a better future for the living.”

“It is always very impressive to see how many people from throughout our community support the Armed Forces, both on Remembrance Sunday and during the year. I was honoured to join members of the Armed Forces through the Armed Forces Parliamentary Scheme and I have nothing but respect and admiration for all that they do. What was clear from my discussions with David and other members of the Legion was that there is still more work to be done to support our veterans, and I will do what I can in Rugby and in Westminster to ensure that they get the help they need.”

“I was delighted to meet Mark and we were grateful that he took the time to talk to us about our work. The Royal British Legion provides lifelong support for the Armed Forces community – serving men and women, veterans and their families. This latest parliamentary event offered a great opportunity to spread the word about the range of services we provide, and it was a pleasure to discuss this in detail with Mark."