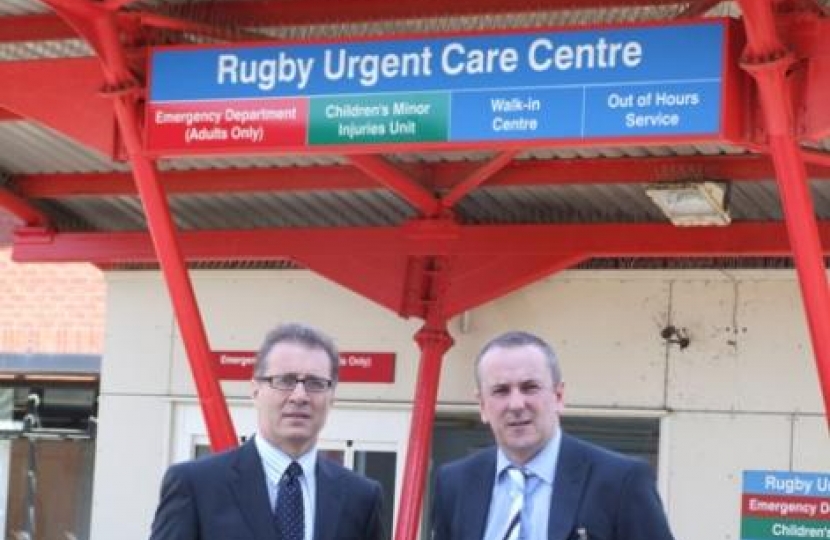 NHS Warwickshire are currently consulting on the future of urgent and emergency care services at Rugby’s local hospital, St Cross. Rugby MP, Mark Pawsey, arranged a meeting last Thursday where Rugby’s residents were able to learn more about the proposals and make their views known.

Around 120 people attended the meeting which took place at the Benn Hall.

After the meeting Mark Pawsey MP said: “Since the announcement by NHS Warwickshire concerning their consultation on the future of urgent care services at St Cross I have received a large number of letters and emails from residents in Rugby concerned about the proposals. This is an extremely important issue for the town, and I am pleased that a large number of people attended to hear more about the implications of what is being put forward and have the opportunity to have their say.”

Mark added: “The meeting provided an opportunity to go through the consultation and it was made clear by all members of the panel that this is not about funding, but about ensuring that local people understand the nature of the urgent care provision and providing a basis to move forward. There has not been a full A&E provision for many years with critically ill patients being taken to UHCW Walsgrave and children have not been treated here since 2005.”

Mark continued: “It was explained that the current proposals are being brought forward to respond to the difficulty in recruiting doctors at the appropriate level in the current climate and the Hospital Managers were pressed on this issue. I believe that despite this, it will be important for St Cross to continue to provide a 24 hour urgent care service to the people of Rugby, particularly in the light of the growth in housing that the town is anticipating in future years.”

Mark concluded: “I am grateful to the Health professionals who gave up their time to meet the people of Rugby and listen to their comments. People here care passionately about the Hospital of St Cross and I believe that those who attended the meeting left with a better understanding of the issues involved in providing urgent care services. The consultation remains open until 18 October. I hope that people will continue to make their views known and I, too, look forward to hearing what they have to say over the next month.”

Bryan Stoten – Chair of NHS Warwickshire since October 2006. Prior to taking up this appointment he had served as Chairman of University Hospitals Coventry and Warwickshire NHS Trust since 2001 and was Chair of Warwickshire Health Authority from 1999 -2001.

Professor Ian Philp – NHS Warwickshire’s Medical Director and Professor at Warwickshire Medical School and a specialist in care of older people. IN 2008 Ian was awarded a CBE for services to the Health Service.

Wendy Lane – Associate Director of Acute Commissioning, NHS Warwickshire. Wendy has worked in the NHS for 18 years and specialises in management and commissioning hospital services. She is the lead commissioner in the Rugby Urgent Care consultation.

Matt Robbins – Assistant Specialist A+E, UHCW; primarily based in Coventry, but undertakes shifts at Rugby along with consultant colleagues. His special interests are Children’s Emergency Care, and Pre hospital Care; one of the immediate care doctors available to West Midlands Ambulance Service to provide clinical support at difficult of complex incidents, and spent 5 years as one of the doctors on the Warwickshire Air Ambulance.

Carl Holland – Director of Operations for the Medicine and Emergency Services at University Hospital Coventry and Hospital Manager for Hospital of St Cross in Rugby. Biomedical Scientist by background. Carl lives in Rugby and as such has a vested interest in the NHS services that are available in Rugby

Dr Jeff Cotterell - a GP at Central Surgery for 22 years.  For the last 4 years he has worked in practice based commissioning and has worked on the A&E project at St Cross from the outset.

Dr Steven Brown - a GP in Rugby for 25 years. He has a particular interest in respiratory medicine and hypnosis. He is one of the Rugby GP’s who has put these proposals to the public.