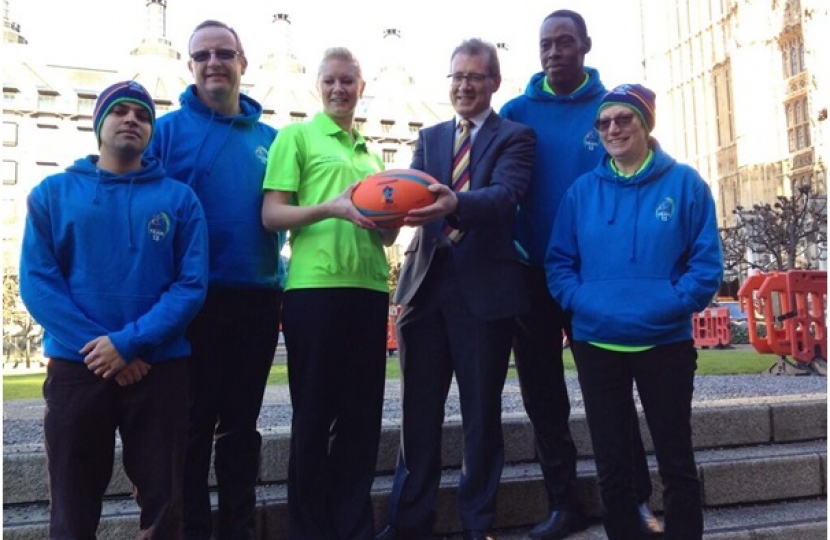 Mark Pawsey MP met members of the volunteer ‘Team 13’ to thank them for the work they have done helping out at the Rugby League World Cup 2013. Hundreds of volunteers from all over the country have been essential to the smooth running of the event, which has been hailed as the most successful World Cup ever.

After meeting the volunteers at Westminster Palace, Mark said:

“Volunteers have become a key part of major sporting events in this country. We all remember what a difference London 2012 Gamesmakers had on the Olympic Games, and the volunteers at the Rugby League World Cup have been exactly the same.”

“As MP for the birthplace of both codes of Rugby, I sure all of us in the town will be delighted that the Rugby League World Cup has been such an unprecedented success. We’re very proud of our heritage as the birthplace of this international sport. Everyone in this tournament, from the  teams, to the organisers, to the fans and these volunteers have made it a great event of which both the whole country and the town of Rugby can all be proud.”

“The Wembley ‘Big Hit’ on Saturday, when both semi-finals will be played, is set to be an exciting day of world-class Rugby League, and I hope many people will be tuning in to cheer their nation on. I’ll certainly be hoping for a big England win!”