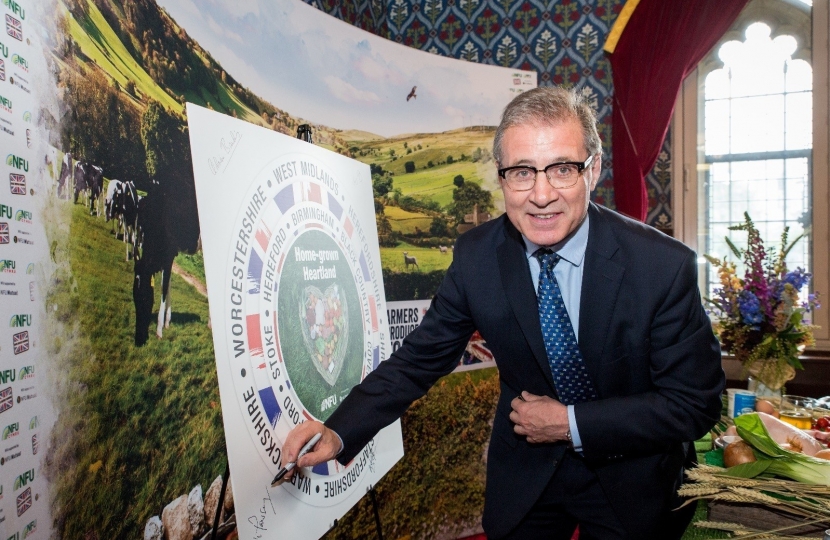 Rugby and Bulkington MP Mark Pawsey met local farmers in Parliament last week and backed a campaign that highlights the farming, food and drink industry’s contribution to the economy, jobs, the environment and communities.

Farming in the West Midlands helps contribute around £800 million to the economy and as well as providing safe, traceable and affordable food, farmers also have a vital role managing the countryside.

Food produced by farmers in the countryside is integrally dependent on food manufacturing operations in more urban areas and vice versa.

Speaking after the event Mark said: “There are so many worthy reasons to support British farmers: they are responsible for securing our fantastic British food supply, looking after our world-renowned countryside and sustaining a dynamic rural economy.

Mark continued: “That is why I have pledged to support the NFU West Midlands Home-grown Heartland campaign in Westminster and to ensure our decisions in Parliament reflect the strategic importance of regional food and farming to the nation.”

Robert Newbery, NFU West Midlands regional director, said: “With a growing global population, changing dietary trends and environmental challenges, farmers and growers in the West Midlands are in a prime position to help tackle these issues.

“Our request of MPs was simple – remember us, champion us and take pride in us – farming and growing in the West Midlands region impacts on everyone’s lives and contributes to even the most urban of communities.”

The NFU West Midlands Home-grown Heartland campaign spells out the region’s importance as the country’s larder but also how farms and other agri-businesses deliver for the economy, for jobs, the environment and communities.

The campaign champions the variety of ways in which farming benefits people and communities in the region and is the bedrock for the food and drink industry, the UK’s largest manufacturing sector.