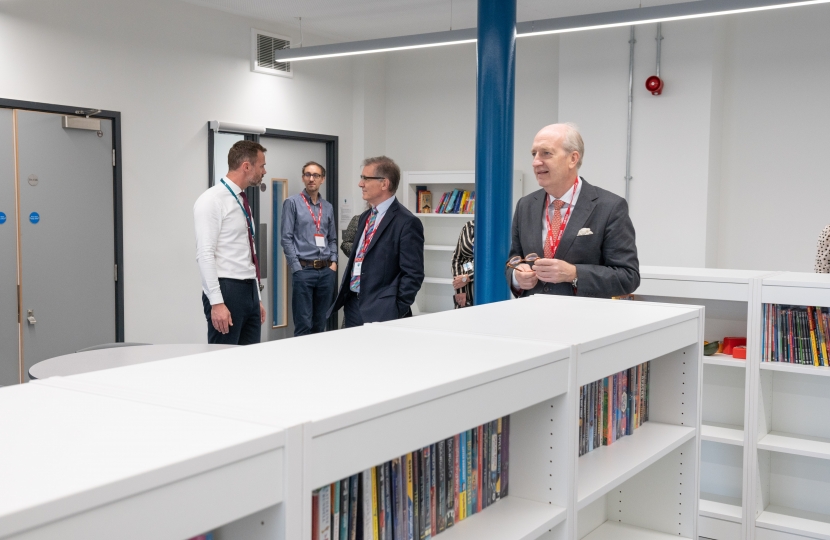 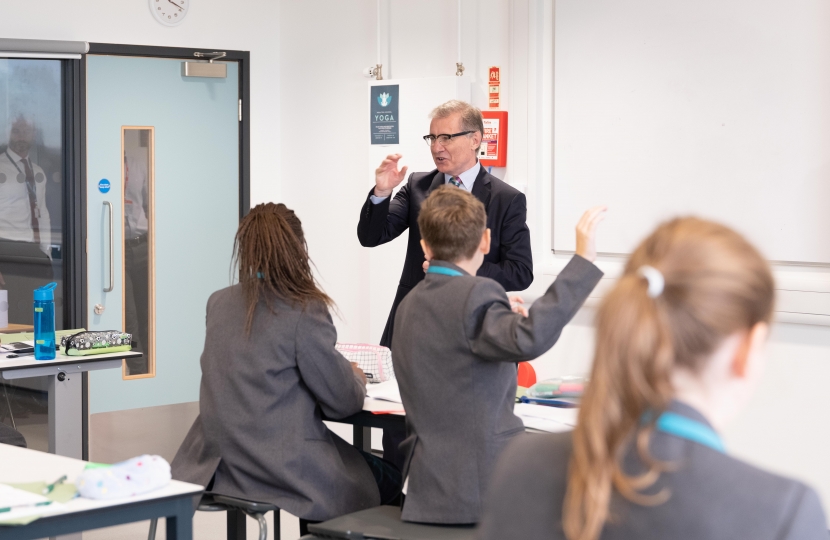 Located at the heart of the growing neighbourhood of Houlton, the £35million project has been delivered seven years ahead of schedule and has seen the historic Grade II-listed Rugby Radio Station building transformed into a state-of-the-art education facility.

Mark was joined by Nigel Hugill, Chief Executive of Urban&Civic, Johanne Thomas, Regional Director for Communities at Urban&Civic and Houlton School’s Principal, Michael McCulley, for a tour of the school to celebrate the culmination of over two years of development, restoration and iconic transformation funded by Urban&Civic with support from the Department for Education.

Standing in the historic Rugby Radio Station’s Transmission Hall, which is now at the heart of the school campus, Mark saw how many of the building’s original features have been carefully restored to link the new school to the heritage of the former Rugby Radio Station. Mark was also shown the newly built additional school buildings, which includes a humanities block and science labs.

Speaking after his visit, Mark said:

“I’ve had the opportunity to see the development of Houlton School since work began and it was great to see the first cohort of Year 7 pupils enjoying the new facilities. The school delivers on creating a fully modern, state-of-the-art, educational centre whilst still recalling the unique heritage of the former Rugby Radio Station Building. It is also thanks to the hard work of Urban&Civic and those who worked on building Houlton School that it has been able to open on time, despite the challenges of the pandemic.”

“Houlton School has also been delivered seven years earlier than originally proposed and is a great example of delivering infrastructure in tandem with new houses. The school is a real jewel in the crown of the growing community at Houlton, and it is another example of how Urban&Civic is paving the way for the future of building communities, not just here in Rugby, but throughout the country.”

“We were keen to show Mark just how resilient Houlton has been through this challenging period – from all perspectives. Transforming a listed building into a school, through a global pandemic, has been a huge challenge but made possible through the commitment of our contractors and partnership with Principal Michael McCulley and Transforming Lives Education Trust (TLET).”

Michael McCulley commented on the visit:

“It was an honour to take Mark Pawsey on a tour of our finished school. As a new school, we have had the great privilege of building our community from scratch. We have taken so much inspiration from the iconic heritage and stunning architecture of our location, and have developed a campus featuring state-of-the-art facilities that will provide so many world class opportunities for our pupils.”

Urban&Civic built and paid for the transformation of Houlton School, with support from a repayable loan from the DFE.

The development of Houlton is a joint venture between developers Urban&Civic and Aviva Investors, and sits on the former Rugby Radio Station site on the eastern edge of Rugby.

Urban&Civic are committed to the and We need to be clear that U&C built the school and paid for the build. Although there was a loan from DfE, this will need to be paid back.

Once complete, Houlton will feature 6,200 new homes and will offer residents a host of first-class facilities, including three primary schools, a secondary school, a nursery, a GP health centre, shops, and extensive walkways, cycleways and green spaces. The development is already home to an award-winning eatery The Tuning Fork, an adventure play park, the first of its three primary schools and community centre The Barn. A 1.5mile link road, Houlton Way, which connects the site to Rugby town centre opened in November 2019.

As part of Houlton’s master plan, Urban&Civic continue to work closely with Local Parish Councils, community groups and its wider network of partners to create a vibrant new neighbourhood in Rugby.