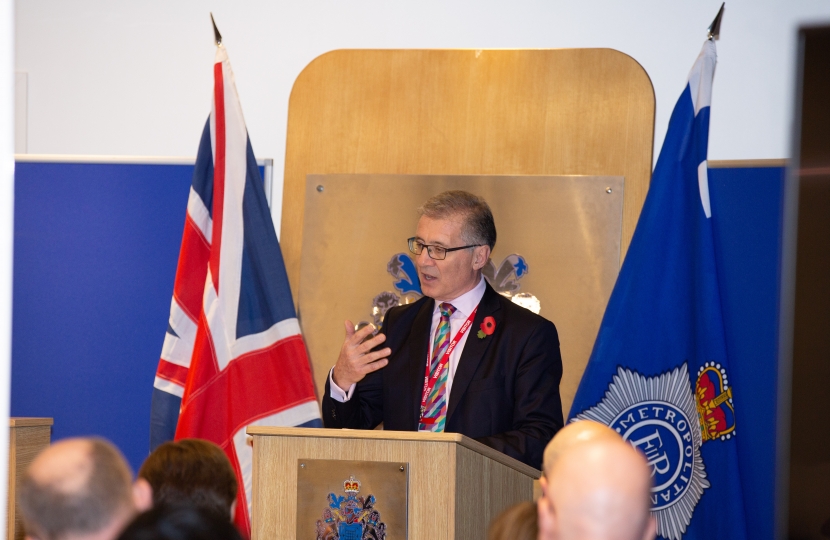 Rugby residents George and Giulietta Galli-Atkinson have held the 23rd Livia Award for Professionalism and Service to Justice in memory of their daughter, Livia, at a ceremony held at New Scotland Yard.

The award is endorsed by the Prime Minister and the Metropolitan Police Service Commissioner and supported by local MP Mark Pawsey. It is made annually to an officer in the Roads and Transport Policing Command judged to have provided the most meritorious service to road death investigation, either in a specific case, or sustained through several investigations and who has provided the family of a road crash victim with outstanding commitment. The nominations are judged by an external and independent panel, including Mark Pawsey MP.

The awards were presented by the Commissioner, Dame Cressida Dick, joined by David Davies, Executive Director of PACTS. In addition, a message of congratulation from the Prime Minister to both awardees was presented by Mark Pawsey.

The 2021 winner of the Livia Award, decided unanimously by the panel, was Detective Constable Jackie Baxter. Alongside the trophy, in his message of congratulation the Prime Minister spoke about her outstanding devotion to duty, significant contribution to collision investigations, support to over 50 families through tragic events in their lives and unwavering commitment to justice. In addition, the judging panel noted her tenacity when acting on behalf of innocent victims and the commitment in the way she rebutted a drivers defence of an ambush.

DC Samantha Searle was the runner up and impressed the judges with her calmness, confidence and determination to provide the best possible service to the family, demonstrating her experience, expertise and resilience in a difficult case that had four children crossing a road on the evening of April 13, 2019, when one of them was hit by a car which failed to stop. Her evidence to the CPS resulted in a charge of causing death by careless driving and causing death while unlicensed.

“It has been a privilege to support Giulietta and George in their work recognising the hard work of the police service when investigating road traffic incidents. The Livia Award, which remembers the tragic death of their daughter Livia after a driver mounted the pavement where she was walking, is a way of highlighting those officers who go above and behind, particularly in their support of victims and their families.”

Giulietta and George Galli-Atkinson said after the awards:

“The Livia Award for Professionalism and Service to Justice has been highlighting the meritorious work of Serious Collision Investigators and FLOs in the MPS Roads and Transport Policing Command. Over 23 years, we have had the privilege of bringing to the notice of officials and the public, the kind of benchmark collision investigation and family liaison work that is a credit to the force and achieves a kind of justice for victims and their families. While the sentences that some of these perpetrators are risible, the determination to show outstanding professionalism and integrity at the initial stage of the criminal justice process, is the mandate of the Livia Award and we are proud of and thankful to these practitioners and specialists who work so dedicatedly”.

All the nominations for the Livia Award in 2021 are as follows:

DC Dariusz Alexander is commended for his actions as a family liaison officer in a challenging case involving the death of a motor cyclist in a single vehicle collision. This was during the lockdown phase of Covid 19 presenting serious difficulties for an FLO who was unable to meet the family face-to-face. This was exacerbated by the family not being allowed to view the body of the deceased rider.

DC James Ramsey is commended for his role as Family Liaison Officer in a failing to stop fatal collision. He was dealing with a family who had low confidence in the police service. He had to prepare them for vivid medical evidence that would be given whilst they were listening to the case in court.

PC Kate Emery is commended for her actions as a Family Liaison Officer in a case where the family of the deceased sought to challenge every aspect of the case. In particular, the widow of the deceased pedestrian was determined to have her voice heard and needed to be constantly calmed to reduce interventions at court.

PC John Gibson is commended for his role as a Family Liaison Officer in a case where the families concerned were in Humberside and Lancashire. He had to negotiate three different protocols which meant that he had to travel to both Humberside and Lancashire to ensure that the families were treated appropriately. He transferred to Humberside whilst the case was ongoing and retained his FLO responsibility following transfer.