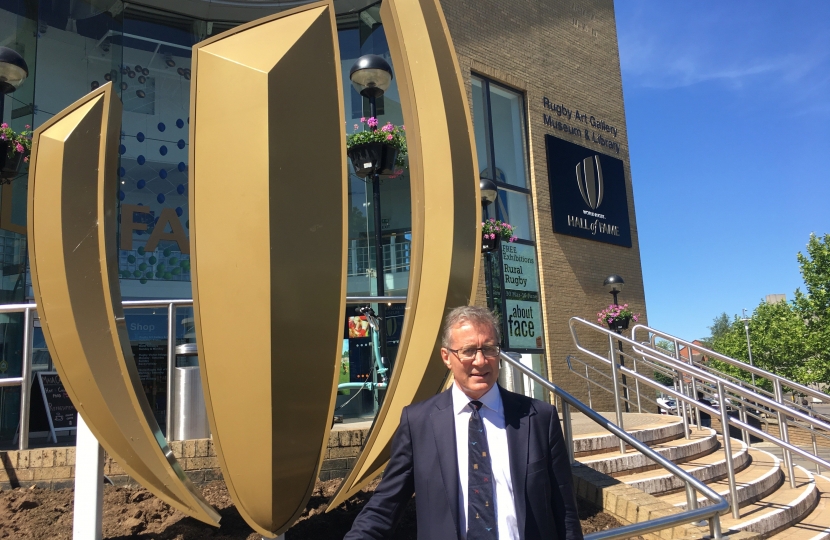 The World Rugby Hall of Fame was praised as ‘one of the many excellent attractions in the United Kingdom’ by Sports and Culture Minister Michael Ellis MP after local MP Mark Pawsey asked how the Government is helping to promote sporting tourism throughout the UK.

During questions to Ministers in the Department for Digital, Culture, Media and Sport, Michael Ellis MP spoke about the steps the Government is taking to promote the rich sporting heritage that exists throughout the UK. With football fever currently gripping the country and the build up to the Rugby World Cup 2019, there has never been a better opportunity to showcase the UK’s talent.

That is why the Government created the Discover England fund, worth £40 million over three years, which will help local areas to grow their tourism sector. Last week, Rugby Borough Council announced their intention to bid for this funding as part of their plan to improve the growing tourism appeal of Rugby town, which is currently worth £110 million to the local economy.

“Since it opened the World Rugby Hall of Fame has hosted over 18,000 visitors and really put Rugby on the map. I have invited the Minister to come to Rugby and see the great things that are happening here and, as the town’s representative in Parliament I will always do all that I can to promote the town locally, nationally and internationally.”

“In my maiden speech in Parliament when I was first elected, I spoke about wanting to do more to recognise the unique link between this constituency and the game of rugby football. I am delighted that over the last few years, we have seen this element of our town really come to the forefront, and the World Rugby Hall of Fame is playing a significant role in the attractions at this year’s Rugby Festival of Culture.”

“Rugby can really stand out as a unique location for visitors from far and wide. We have made a great deal of progress in recent years and with the Rugby Festival of Culture launching this week we have some great reasons to visit the town. I am very pleased that both nationally and locally we are continuing to look at ways we can continue to increase our tourism appeal and as Rugby’s MP I’ll continue to highlight the great things happening here.”

Speaking in response to Mark’s question on supporting attractions such as the World Rugby Hall of Fame, Culture and Sports Minister Michael Ellis said:

“I would be delighted to visit Rugby. My hon. Friend is quite right to draw the House’s attention to the World Rugby Hall of Fame, which is one of the many excellent attractions in the United Kingdom. The Government is committed to boosting UK tourism, particularly outside London, and the Discover England fund does that.”