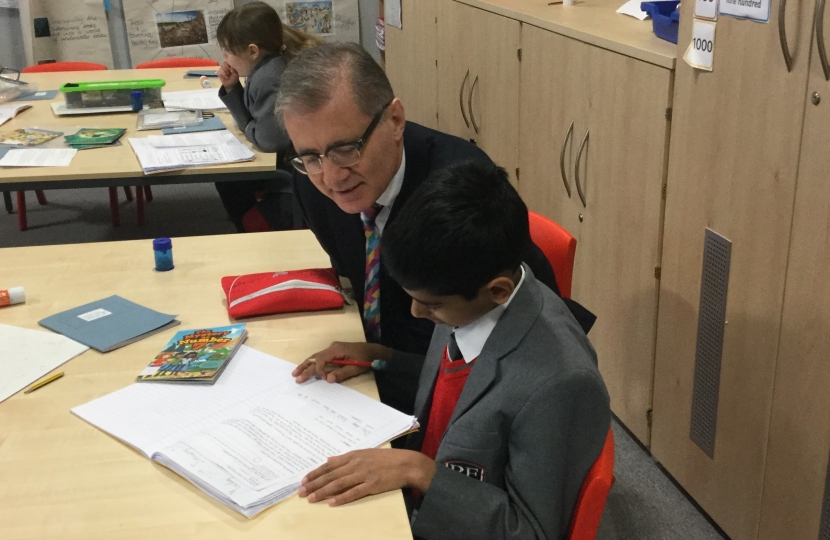 Rugby MP Mark Pawsey at Rugby Free Primary School, which is receiving an additional 8.66% per pupil funding from April 2020

School funding in Rugby is to receive a major funding boost under plans unveiled by the Government last week.

Rugby’s MP Mark Pawsey has welcomed this new funding as part of the Government’s emphasis on providing the best possible start for young people. It also delivers on the commitment to fairer funding for Warwickshire, which has historically been amongst the lowest funded local authorities for education in England. The funding announcement also includes an increase of £780m next year to support children with special education needs and disabilities (SEND) – an increase of over 12% compared to 2019-20.

The extra money will be available from April and ensures that per-pupil funding for all schools in Rugby can rise at least in line with inflation and delivers the promised increase in funding which the Prime Minister announced in August.

“Every child in Rugby deserves the best possible start in life which is why this funding increase for our great local schools is so important. I know from talking to teachers and parents that ensuring that our schools are fully funded is a key concern, and this announcement delivers for our schools.”

“The 7.5% per pupil funding boost next year will mean that every school in Rugby will receive a budget increase, giving teachers, parents and pupils the resources they need to continue improving standards in our schools.”

“I am particularly pleased that the new funding recognises the historic funding disparity for underfunded regions such as Warwickshire and will give parents the confidence that their children are getting a world class education.”