Finding out more about the new Fiver 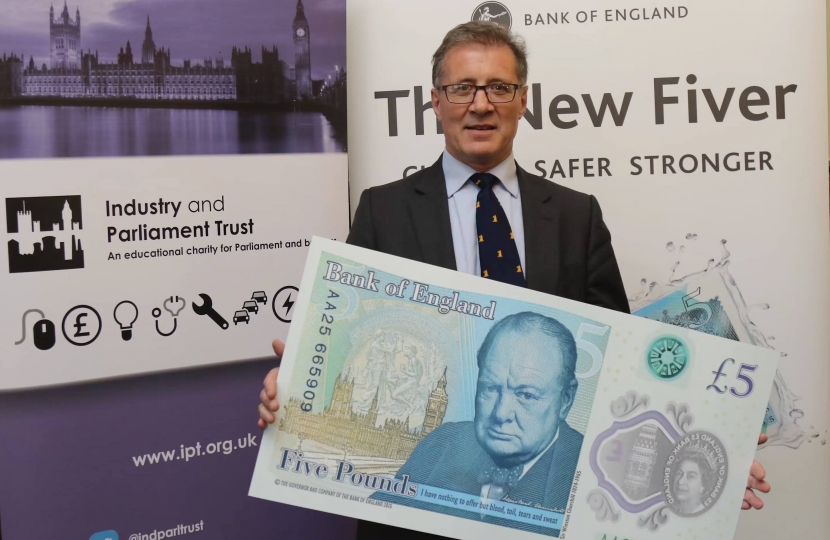 Rugby and Bulkington MP Mark Pawsey joined the Chief Cashier and members of the Bank of England team in Parliament last week to learn more about the New Fiver before it is issued on 13 September.  Mark was able to try out the new security features and find out how local businesses and the public in Rugby and Bulkington can prepare for the new note.

The new Bank of England £5 note features former Prime Minister Sir Winston Churchill and will be made of polymer, a thin flexible plastic.

The New Fiver will begin making its way into cash machines and shop tills from 13 September. Paper £5 notes will be gradually withdrawn once the New Fiver enters circulation and will cease to be legal tender in May 2017. However, until then everyone can carry on spending paper £5 notes as usual.

Rugby residents can see the New Fiver online at www.thenewfiver.co.uk or at one of the Bank of England’s regional roadshow events around the UK.

“I was very interested to be able to find out more about the New Fiver and speak to the Chief Cashier about the improvements that have been made to the new £5 note. Thanks to the fact move to a polymer rather than paper note, it will be far harder to counterfeit the New Fiver. This means that local residents and retailers can have confidence in the currency in circulation.”

“The New Fiver will also remain in much better condition for longer and is expected to last at least 2.5 times longer than paper notes - around 5 years. They will therefore be both better for the environment because they last longer and so fewer notes will be printed and also less energy will be used in manufacturing and cash transportation. Additionally, when a polymer note has reached the end of its life it can be recycled.”

“Local residents may be interested to know that the New Fiver is the first of three new polymer bank notes, which will replace the £10 and £20 notes by 2020. The new £10 note will feature the novelist Jane Austen and be issued in summer 2017 and a new polymer £20 note featuring the artist JMW Turner will enter circulation by 2020. This will provide a safer, more secure currency for the 21st century. ”