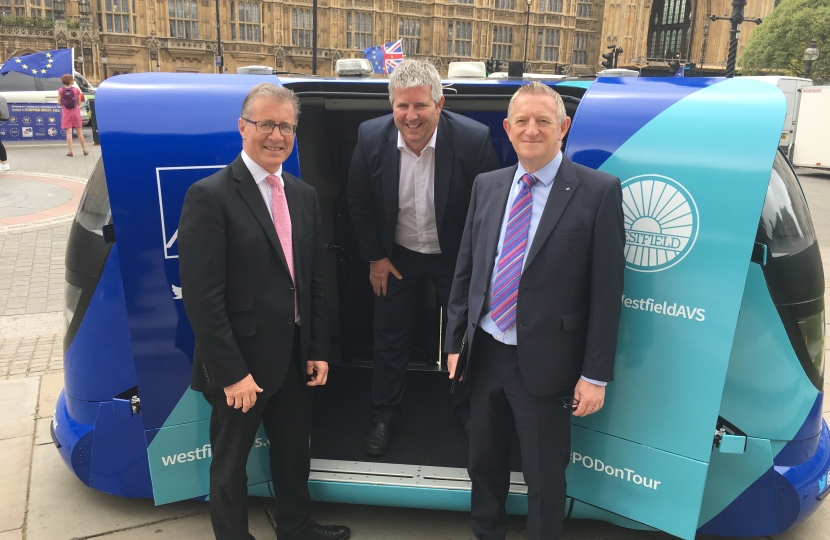 Rugby MP Mark Pawsey got a first-hand look at the future of the automotive sector when AXA & Westfield Technology Group brought their new driverless “pods” to Parliament.

Already in operation in a number of small-scale trials, AXA and Westfield are two of the partners on the Capri project, one of the UK Government-backed initiatives for this emerging technology in the UK. With the Automated and Electric Vehicles Bill currently passing through Parliament and the Government targeting the introduction of automated vehicles by 2021, the reality of driverless cars is fast approaching. Last week’s event provided the opportunity for Mark to meet Westfield Technology Group CEO Julian Turner and AXA Technical Director David Williams, two of the experts making the transport revolution a reality.

The small scale trials are already in place at some airports and since 2017 Coventry has been the site of a number of tests of autonomous vehicles, with Jaguar Land Rover hoping to lead the way in this developing technology. The Westfield Pod is currently being built and developed in Birmingham, at the heart of the UK’s automotive sector.

“Driverless technology is a rapid advancing area of technology and one in which the UK is poised to lead. Along with my colleagues on the Business, Energy and Industrial Strategy Select Committee we are looking carefully at how automated vehicles can transform the way in which we use the roads in coming years.”

“At the moment, the overwhelming majority of road traffic incidents are the result of human error, but the introduction of driverless technology will impact more than just road safety. Autonomous vehicles will provide mobility solutions for the elderly and disabled, as well as reducing congestion and offering new transport services in urban and rural areas alike.”

“Whilst there is a long way to go before automated vehicles are a part of day-to-day life, what was clear from speaking to those developing this technology that they will be on our roads sooner than we might imagine. I want to see the West Midlands seize the opportunities this technology will provide. In recent years we have seen automotive manufacturing really succeeding with a number of manufacturers, including Jaguar Land Rover, the London Electric Vehicle Company and Aston Martin developing the next generation of electric vehicles. Automated vehicles represent another opportunity to build on this success and really make the West Midlands the home of the cars of the future.”