Buy “Just A Book” to support our local High Street 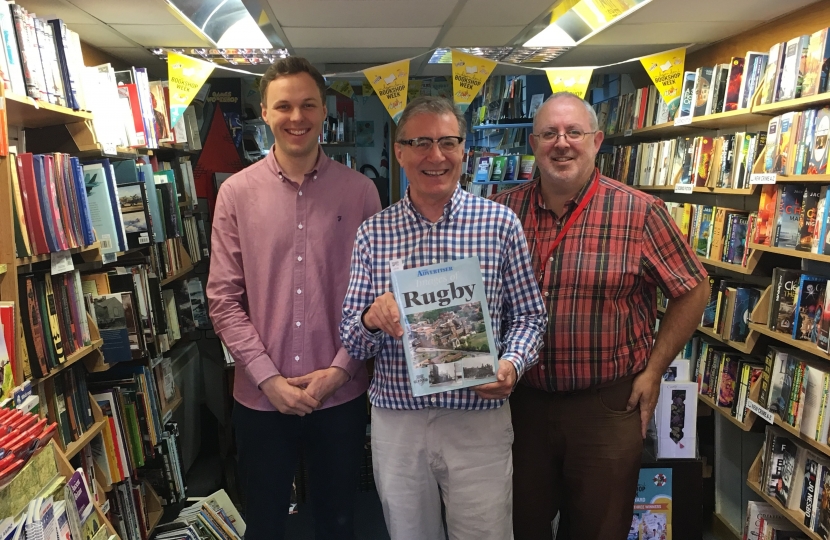 A campaign to promote high street retailers and encourage residents to shop locally – even for “Just a Book” - has been backed by Rugby MP Mark Pawsey.

Mark visited Hunt’s, a well-known independent retailer specialising in new and second-hand books, alongside the new Operations Director of Rugby First, Rich Warren, to promote the “Just a Book” campaign. The campaign has been organised by the Funding Circle, a leading provider of small business loans within the UK, to encourage people to shop locally. Whilst there, Mark spoke to Christopher Hunt, the owner of Hunt’s, about the importance of small businesses to Rugby’s local economy.

“I’ve always said that Rugby’s town centre is home to some really great independent retailers and for over 20 years, Hunt’s has been a fixture of the High Street. What the ‘Just a Book’ campaign is trying to remind people if is the importance of supporting smaller, local businesses, even by buying something as simple as a book. If we do not these businesses will inevitably disappear which I believe would be a great shame for Rugby.”

“The ‘Just a Book’ campaign is a good initiative to encourage more people to shop with our independent retailers and I was it was great to join Christopher Hunt and Rich Warren at Hunt’s to support it. Small businesses are vital for our local economy and I hope that in the run up to the busy Christmas period, people will try to buy from some of our great retailers – even if it is Just a Book.”

Chris, the owner of Hunt’s added:

“In the current climate independent shops are the life blood of the high street. Sustainability of independent shops is reliant upon the communities they sit within and the valuable support of visiting customers.”

More information about Hunt’s can be found at: https://www.huntsbookshop.com/

More information about the ‘Just a Book’ campaign can be found at: https://www.justacard.org/justabook