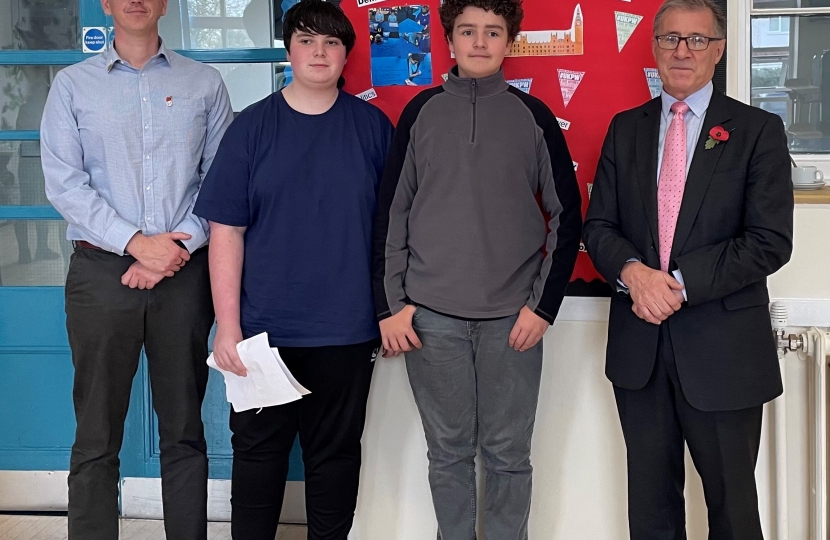 Rugby MP Mark Pawsey recently visited Avon Park School in Rugby as part of UK Parliament Week to talk to the pupils there about the role of a Member of Parliament and his work representing Rugby & Bulkington.

At the school, Mark took part in a session with the entire school where he gave them some insights into his experience of being Rugby’s MP since 2010 and the ways in which in represents the local area whilst in Westminster. Mark also answered questions from the students, which covered a range of topics including Rugby’s local health services, the coronavirus pandemic and the Government’s plans to improve and protect our environment.

Avon Park School is a specialist day school based in the heart of Rugby which provides high-quality education for boys and girls. During his visit, Mark was shown how the school meets the needs of their diverse group of pupils who have a range of complex educational needs, communication difficulties and challenging behaviours, and took questions on how the government can better support pupils with special educational needs.

Mark’s visit took place during UK Parliament Week 2021, an annual event which is a celebration of the UK’s democracy and the responsibility which MPs have in representing their communities. In 2020, despite the challenges of the pandemic, over 8,000 events took place across the UK involving nearly a million people. This year, Mark has visited a number of schools and community organisations including Avon Park School.

“I was delighted to visit Avon Park School and talk to the pupils there about the role of an MP. It was clear to me how enthusiastic they were to talk about the democratic process and how I as Rugby’s Member of Parliament represent our town and community. Ensuring that MPs engage with their constituents, of all ages, is a vital part of the job and UK Parliament Week is an important part of that work.”

“It was also clear how engaged the pupils at Avon Park were with both the topics we were discussing as part of UK Parliament Week, but also wider issues such as the environment. Their questions were really insightful and interesting, and it was a pleasure to be able to answer them.”